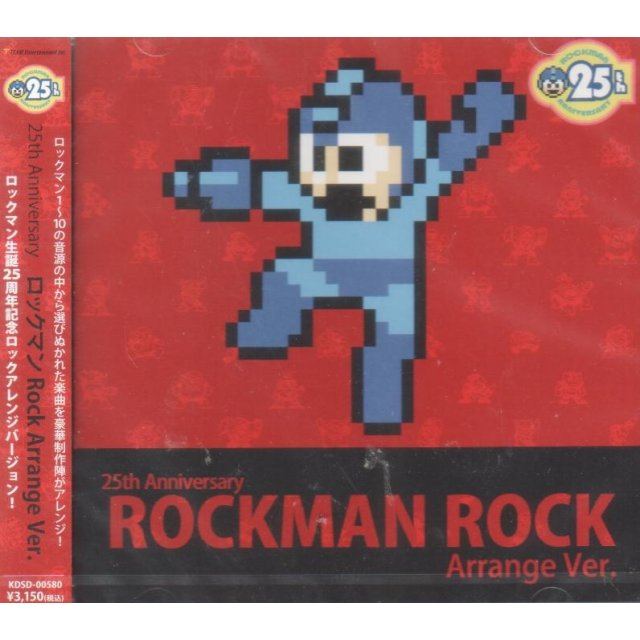 Audio CD
1w Expected stock arrival within 1 week.
US$39.99
Please take note that, once purchased, this item must be paid immediately and cannot be cancelled or returned.
Manufacturer
Sony Music
Version

Celebrate Rockman's 25th anniversary. 10 games have been released in this quarter of a century. And walking through these years, the music producers collected background music and themes that define the franchise. Go through the ages of Rockman in these two albums and fill yourself with nostalgia. The themes are rearranged into rock and techno styles. Feel the power of the beat as you play the battle themes, and see how characters are re-introduced by their character themes. Some music have been weaved together to create a medley, so that the performers can give you a quick tour around stages. CAPCOMの名作「ロックマン」シリーズの25周年を記念し、「ロックマン」1～10のBGMのうち、選りすぐられた楽曲をロック＆テクノアレンジしたCDを2枚同時発売。ロックアレンジver.では迫力あるギターサウンドがロックマンのメロディを奏でます。

If you are familiar with 25th Anniversary Rockman Mega Man Rock Arrange Ver., why not let others know?

shadowstar123 (249) on 24, Feb. 2013 05:48 (HKT)
I have mixed feelings about this one.
Everything seems like it would be good based on the tracklist which is a good selection, but the way the music is presented doesn't seem like something you would hear in a Megaman game. The music in my opinion is way too slow. When I saw Solarman on the list, I thought this has to be good, I played it and it was if if they took everything that made Solarman's theme great and addicting, and left it out. It is slow and dull. This soundtrack is OK for background music if you are working on homework or something, but for a good listen to bring you back to the past of what you liked so much of the Megaman music, this album does not do it justice at all.
forteii (67) on 04, Dec. 2012 02:56 (HKT)
Don't judge a soundtrack CD by its cover art... =)
So, in spite of Rockman's 25th Anniversary, it's no surprise that fans of the franchise have been disappointed as of late by the lack of new releases when it comes to games. What this excellent soundtrack does, however, is help cope with that loss somewhat.

The first two tracks are lengthy medleys that encompass various great themes from the 3 original Famicom titles while Dr. Wily Stage 1 (Rockman 2) - an all-time favorite - has been extended.

Dr. Cossack Stage 2 has been spliced with Dr. Wily Stage 2 (both from Rockman 4) to great effect as it offers a nice change in both pace and mood. Both Splashwoman and Darkman's themes include a few voices and they are a treat if you are into J-pop 'n stuff.

And, what to say about Blues' wonderful theme closing... Fans May Cry, you are gonna luv it!! d(^-^)b

Of course, there's also a few headscratchers that still manage to sound good. Namely in the form of Metalman's theme which - by all accounts - does not remind me of the original in the least. Also, having Dr. Wily Stage 1 (Rockman 8) in this came as an utter (but not exactly unwelcome) surprise to me. That said, I can't be too hard on this one in particular simply because it sounds pretty good given the source material (aka Rockman 8's music was HIGHLY unmemorable to begin with!) XP
And, sorry Solarman fans, his theme is "meh" here...

So, as to close, all the music sounds really great and remains as heart-pumping and hyper-powerful as ever. Perhaps it could have used something in the "extras" department (a short memorial comic on the back of the booklet wouldn't have hurt, for instance) .

But, if anything, it deserves mention. Even though this item is indeed a tad expensive (for a soundtrack) , after listening to this I am ready to take Capcom's word for it... Perhaps it hasn't entirely forgotten about Good ol' Rock just yet. =)