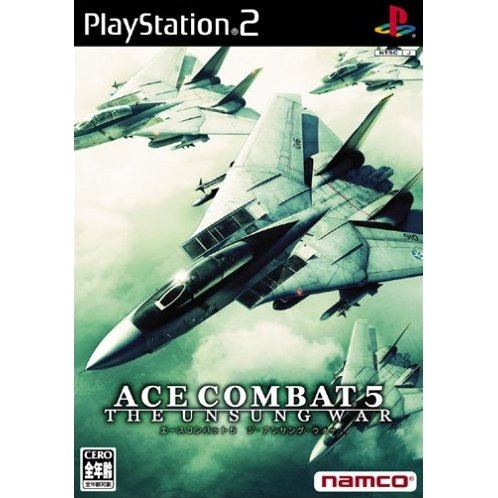 Bandai Entertainment
Compatible with PlayStation 2™ (PS2™)
For JPN/Asian systems only.

sold Out of print / Out of stock.
Manufacturer
Bandai Entertainment
Compatible With PlayStation 2™ (PS2™)
Version


Click on a thumbnail to see more pictures for Ace Combat 5: The Unsung War

With more than 50 different licensed planes and an intense storyline extending over 30 missions, players will be put to the ultimate test, including air-to-air combat, air-to-ground fighting, air-to-sea assaults, rescue, recon and much more. Incorporating ultra-realistic beautifully rendered in-game graphics and cinematics along with unparalleled game play; ACE COMBAT 5 goes a step beyond the traditional air combat gaming experience. One of the exciting new features to the sequel includes Wingman Command, where players can issue directives to their wingmen mid-mission to carry out coordinated group attacks. Additionally, the in-game radio communications with the squadron and enemies adds to the realism and intensity of the dynamic battle sequences. In the game's premise, it is September 23, 2010 on distant Sand Island, a small island in the Ceres Ocean that divides the two superpowers, Osea and Yuktobania. An entire military base is on red alert--the 108th Tactical Fighter Squadron intercepted an unidentified aircraft and the entire squadron was decimated. You are a fighter pilot, part of the new squadron that's been called into action to protect your nation of Osea. Now, the story begins to unfold.・戦場では僚機に指示を与え、作戦成功へと導け！・細部まで徹底的に表現された実在戦闘機が５０種類以上！・多彩、興奮のドラマティックなミッションが３０ステージ以上！・様々な天候から樹木一本までも再現、驚愕のビジュアル！・戦火を生き抜く人間たちに迫った、感動のドラマムービー！・英語、日本語の二ヶ国語音声を収録・息つかせぬハイテンションバトル！アーケードモード搭載！・激戦を彩る迫力のエフェクト群！・２６，０００もの無線が飛び交う戦場！

If you are familiar with Ace Combat 5: The Unsung War, why not let others know?

inki4music (5) on 26, Jan. 2005 17:54 (HKT)
Mobius 1, ENGAGE!
Stunning visuals, great gameplay and much faster than episode 4, one of the best PS2 games and the best shoot\'em up ever If played with dedicated flight stick contol from Hori.