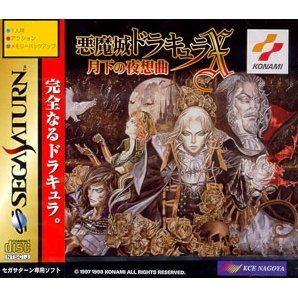 Konami
Rated
By Our Customers
Compatible with Sega Saturn™ (Saturn)
For JPN/Asian systems only.


Click on a thumbnail to see more pictures for Akumajo Dracula X: Gekka no Yasoukyoku

It is the late 1700's. Dracula was defeated by Richter Belmont 5 years ago. Richter rescued his true love, Annet Renard, and her sister, Maria. Now, Richter is missing. Maria is determined to find and rescue her friend and savior. Alucard, the son of Dracula, who defeated his father over 300 years ago with the help of Ralph C. Belmont, senses his father's evil ways once again at work. He was to sleep forever after their last confrontation, but he has awakened to once again face his father in battle. This is the Saturn translation of Symphony of The Night for PSOne, except that this version has an added bonus level with a new boss, and extra bonus tracks in the sound test with remixed music from the Castlevania series. Also, an extra character is included. Play as Alucard, Richter, or--Maria in this version.

If you are familiar with Akumajo Dracula X: Gekka no Yasoukyoku, why not let others know?

iampeter (1) on 18, Oct. 2008 05:56 (HKT)
Definitive
Anyone who finds themselves at this website knows what they're looking at. It's no secret that this is one of the best games of all time.

There is plenty of whining that the Saturn version is inferior. The bottom line is we should be thankful that we have access to versions such as Akumajo Dracula X. Having features such as 1 extra playable character (not two as stated in another review), new areas (although small), and more items make it superior in my eyes.
The slowdown and graphics do not hinder gameplay. It'll usually be tied to the outrageously flamboyant death sequence of a visually intensive boss.

I also have to say that not being subjected to the atrocious voice acting in the American version is a plus... aka - this is how the game was meant to be experienced.

This is a gem for your collection, period. I've liquidated a large amount of my collection, however this remains one of the few retro pieces I've held on to.

It's worth it... even if you've cleared over 200% on the PS. Do it again.
Anonymous on 29, Jul. 2006 09:35 (HKT)
castlevania
win castlevania be and for sega saturn
TopGun1986 on 05, Apr. 2006 17:37 (HKT)
Stick to the PSX version
Don\'t buy this game unless you\'re dead serious about game collection.
After I had completed the Saturn version I felt ripped-off, all the slow-downs and neat effects that is gone makes me angry and the whole port felt copy and paste to me.
Sure the new things were neat little additions that should have been in the PSX version from the beginning but it\'s not worth the money, stick to the 5 star PSX version and be happy with that.
crimson_behelit (2) on 17, Nov. 2004 04:00 (HKT)
(Akumajo Dracula X: Gekka no Yasoukyoku) Fantastic!
I just got my copy in the mail yesterday. Having played the American PSX version \"SOTN\" and after looking at the reviews that lot of people have made, I actually considered not buying the Saturn version. It seems that a lot of people have beef with this game, I think it has something to do with the animosity between PSX and Saturn owners. PSX owners think they have the superior version and claim it openly. Apparently, 99% of these die hard PSX fans haven\'t even played the Saturn version. I have heard claims of outrageous load times, crappy graphics, and unbearable slowdowns. The simple fact of the matter is, these claims are superfluous. The load times are barely noticeable, the graphics are basically exactly the same, and the slowdowns only happen at quirky times. None of the above have any affect on the gameplay. If you haven\'t memorized every single nuance of the PSX version, you would never notice any of those things. Now, on to the good things! Despite it\'s slight short comings, the game has a lot of amazing things going for it! Alucard gets some running shoes that make exploring the 2nd castle a heck of a lot more fun. Alucard, Richter, and Maria are all selectable from the start(this feature alone justifies the purchase). In addition, all 3 characters have their own custom theme song when they start on the first floor of the castle. If you hold up while selecting Richter, you get to play him in his long sleeve \"renaissance style\" costume, which is extremely cool. Two new areas have been added to the game, both with cool new monsters and items to be found. As far as the voice acting, don\'t get me started! The American PSX release has notoriously cheesy voice acting, it\'s unbearable at times and it almost makes the game unplayable for otaku. This is where the Saturn version shines! Perfect tonal voice acting that not only matches the mood of the game, but perfectly accentuates the character animations as well! It simply doesn\'t get much better in the voice acting department. All in all, the Saturn version is a wonderful upgrade to one of the greatest 2d videogames of all time. Having played the PSX version and now the Saturn version, I can honestly say that the positives destroy the negatives. The Saturn version is worth every penny and I would buy it again if I had too!
Type on 13, Oct. 2004 23:11 (HKT)
Amazing
The graphics are slightly worse than on the PS but in return the image is full screen, no borders. Better voice acting than the English version, New monsters, new area\'s and Maria playable along with the fact that Alucard also has a 3rd hand in the menu which is nice for quicker item usage makes this one a winner. Downsides are the way you have to select the map and the item names being all in japanese (they do have pics though).
1 »