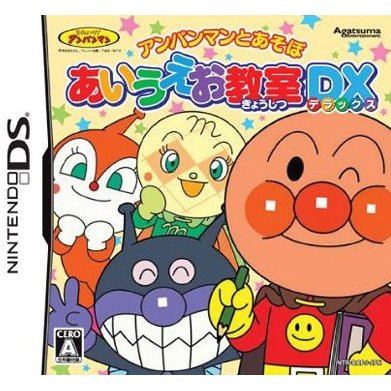 Anpanman to Asobo: Aiueo Kyoushitsu is a game where you practice drawing kana and identifying objects with flashcards. Anpanman voices the game to help young players learning to read write the correct words. While Anpanman to Asobo is clearly designed with children in mind, It can also be used as a tool to teach people elementary Japanese. It might not make you fluent, but this is definitely a decent alternative to dry language tapes and hiragana workbooks!

If you are familiar with Anpanman to Asobu: Aiueo Kyoushitsu DX, why not let others know?

Rider (2) on 02, Mar. 2014 16:12 (HKT)
tl;dr: This game is great to learn from!
I got this mainly for my little sister to help her learn Japanese, but I've played a little bit and can say that it is fun, even though a good portion of the game is embarrassingly easy for anyone who DOES know the kana.

There are twenty-five minigames that are grouped under three categories; easy, medium, and hard. The easy games are for beginners and doesn't focus much on the actual characters. For example, four of the eight games are actually kana related; two "guess the kana" games where a moving light is shone on a wall and you're to guess which kana is on the wall (one for katakana and one for hiragana), and two "make the kana" games, where the player is given lines that make up parts of the kana and place them into bread trays (fitting the theme of Anpanman and the Bread Maker). Like the first two games, it's separated by hiragana and katakana.

The other four games under the easy menu are a rhythm game to 3 different tunes; the Anpanman Theme Song, the ending song, and (as far as I can tell) an unrelated song about how they like Anpanman.

There is also a coloring book-type game, a line drawing game where the player follows lines made by Baikinman for Anpanman to follow, and a puzzle game (that gets up to six pieces, as far as I can tell). And of course, these games will only help if the sound is turned on.

Medium difficulty ups the ante a little bit by adding words. In one game, the player makes lines between a word and its picture (like "こころ -- ♥"). Other games include dragging kana onto a train to make a word, playing a shortened day in a child character's life and speaking the correct phrases into the microphone, and drawing kana onto the lower screen to have a character shoot and destroy targets with that kana on it. The only non-learning mini-game included is a "spot the differences" game, which is the only game in the medium mode that you can lose to.

Hard difficulty is actually pretty difficult for a beginner. If you know a lot of nouns, your mileage may very, but this is the area that I find the most challenging. Games include adding tenten to kana, kicking a soccer ball with a hiragana or katakana character into the correct goal labeled hiragana and katakana, and playing Shiritori.

You can also view a dictionary, play with interactive stories, and review kana, all from three other buttons on the main menu.

There is also the AIUEO Land, another place to go from the main menu. This just lets you approach the same minigames, but from a map instead of a list.

In summary, it's a cute game that is cute, even if a bit easy, and great to learn from--provided you have sound--not to mention that it uses the DS hardware very nicely.