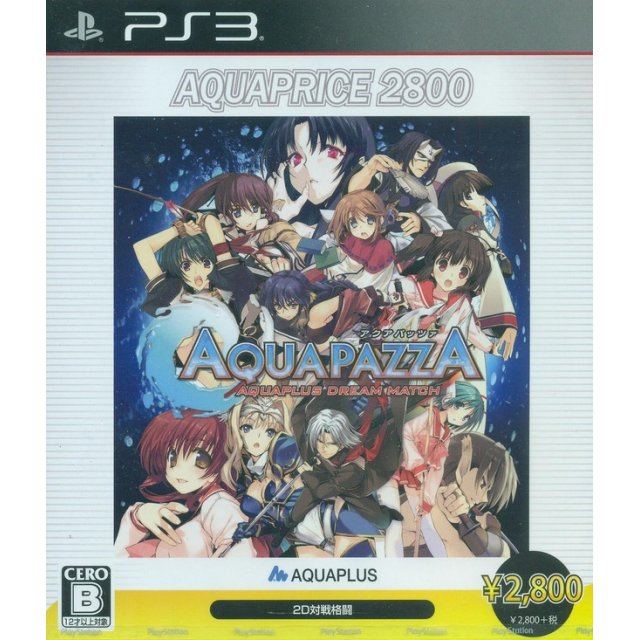 Works on all systems sold worldwide, a correct regional account may be required for online features.
1w Expected stock arrival within 1 week.
US$24.99
Our previous price:US$ 39.99
You save: US$ 15.00( 38% )
Manufacturer
Aqua Plus
Rated By Our Customers
Compatible With PlayStation 3™ (PS3™)
Version

Works on all systems sold worldwide, a correct regional account may be required for online features.
1w Expected stock arrival within 1 week
Price
US$24.99
Our previous price:
US$ 39.99
You save:
US$ 15.00( 38% )
Play-Asia.com Return & Refund Policy
Trustpilot
Trustpilot
Click on a thumbnail to see more pictures for Aqua Pazza: Aquaplus Dream Match (AquaPrice 2800)

AquaPazza: From eroge to Fighting:

Though originally released in Japanese arcades in 2011, AquaPazza is a new western PS3 entry in the 2D fighting genre and is heavily influenced by anime, huge combos and the unique AquaPlus/Examu Partner fighting system.

Examu, the creators of the acclaimed Arcana Heart series have combined their fighting game expertise with AquaPlus and all the characters from the latter's anime series plus franchises; many of these characters have been featured in AquaPlus' branch of adult games (Eroge) made by their subsidiary Leaf.

No doubt an eclectic cast of 26 characters - from the bookworm Manaka who literally uses bookshelves to smash fools to the beautiful Sasara, master of the lance and shield – this PS3 version features famous characters from Utawarerumono, Tears to Tiara, all the To Heart series, Kizuato, Routes, Comic Party, and White Album.

From this list of characters, players choose one main and one partner to complete the AquaPlus/Examu Partner fighting system. Partners will assist players as 1 of 3 classes with specific tactical actions. For instance, if players incorporate their partner aggressively, they will get rewarded for this play style; the partner will add an additional skill element to help break defensive play.

As well, each character has their own storyline; when completed, another story mode with an alternate ending is then after ready for play. For even more content, there is also a time-attack mode, training mode, gallery mode and online modes like tournament mode with enabled spectators, ranked/unranked matches and friends-only matches.

Even with all this, Atlus is offering AquaPazza at a fan friendly price. At this stage, there is no excuse for fans of 2D anime fighters to skip this title - we ask again: are your arcade sticks ready?

If you are familiar with Aqua Pazza: Aquaplus Dream Match (AquaPrice 2800), why not let others know?