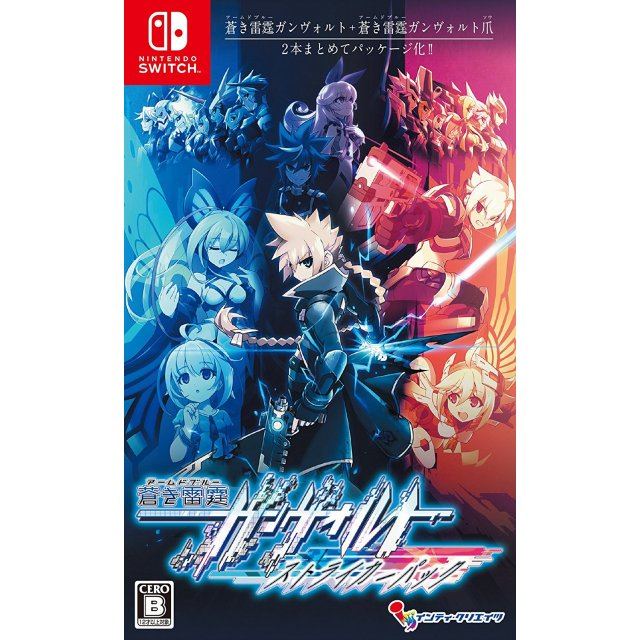 Works on all systems sold worldwide, a correct regional account may be required for online features.
24h In stock, usually ships within 24hrs. (Only 1 left in stock.)
US$65.98
Limited time offer - Secure yours now before the offer expires!

Works on all systems sold worldwide, a correct regional account may be required for online features.
24h In stock, usually ships within 24hrs
(Only 1 left in stock.)
Price
US$65.98
Our previous price:
US$ 71.99
You save:
US$ 6.01( 8% )
Play-Asia.com Return & Refund Policy
Click on a thumbnail to see more pictures for Armed Blue Gunvolt Striker Pack

If you are familiar with Armed Blue Gunvolt Striker Pack, why not let others know?

CrimsonMoonMist (14) on 06, Dec. 2019 22:10 (HKT)
A unique one-two punch of action platformers
The Azure Striker Gunvolt series is Inti Creates' flagship spiritual successor to the Mega Man Zero and ZX series. However, unlike many similar efforts, this is one franchise that does things quite differently.
Both games in this pack are fairly typical action platformers at first glance, but what sets them apart are their focus on high-score. When playing as the titular Gunvolt, you're encouraged to "tag" as many enemies with your non-lethal bullets as possible before destroying them all with your special attack. The more enemies you take out at once, the higher your score. However, getting hit too many times makes you lose everything since the last checkpoint, which gives the game a nice risk vs. reward-type of feel.

In the second game, Gunvolt is joined by a second protagonist, his rival Copen. This character plays completely differently from Gunvolt and his way of gaining points are likewise completely unique to him. Copen's gameplan is all about staying airborne. When in the air, Copen can dash in every direction except straight up or straight down. Dashing into an enemy causes Copen to rebound off the enemy and lock on, allowing you to finish it off in short manner. Meanwhile rebounding off the environment recharges the meter Copen uses to fuel his dashes, allowing him to maximize his air time. This cycle of ricocheting off of your surroundings while taking out everything in your path makes for an incredibly kinetic and flashy experience.

As far as my personal thoughts go, Gunvolt's gameplay, and by extension the first game as a whole, has a fun and unique gameplay hook, but once you take away the initial novelty, it kind of doesn't feel all that satisfying due to Gunvolt's slower pace. Copen's gameplay on the other hand, is a fast and addicting rush of 2D action that plays like nothing else. The hightened difficulty and tighter stage designs featured in the second game also help elevate Gunvolt's own side of the equation to something that feels significantly better than before.