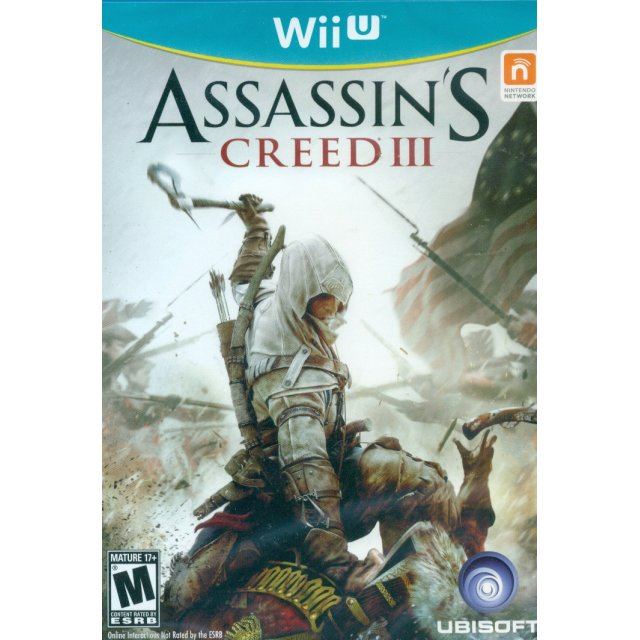 Ubisoft
Rated
By Our Customers
Compatible with Wii U™ (Wii U™)
For US/Canada systems.

The America Colonies, 1775: A brave your warrior fights to save his homeland. But what begins as a struggle over territory turns into an extraordinary journey that will transform him into a Master Assassin - one that will forever change the destiny of a newborn nation.You are Connor, warrior son of a Native American mother and British father. As the colonies draw closer to revolution, you will dedicate your life to the freedom of your clan, becoming the spark that ignites the revolution into a full blaze. Your crusade will lead you through blood-soaked battlefields and crowded city streets, to the perilous wilderness and stormy seas. You will not only witness history...you make it.Experience the hidden truth behind one of history's most influential wars: the American Revolution. Unleash lethal new skills and weapons, and experience a stunningly realistic world created by Ubisoft-AnvilNext, a new engine that redefines gaming. Welcome to an entirely new chapter in the Assassin's unforgettable saga!

If you are familiar with Assassin's Creed III, why not let others know?

Ebenflow78 (29) on 27, Jun. 2014 16:23 (HKT)
Don't buy this crap!
This is the worst AC game ever! It is no doubt a very boring game. There is no sense of progression., no health upgrade or defense or whatsoever. The battle on the ship is the worst. The control is so bad that I actually stop playing this freaking game just at the stage where I had to destroy the loyalist. It is so bad..please don't waste your hard earned money on this crap. Oh and on Wii U, it keeps freezing that I had to restart the console a couple of times. Avoid this!
PengsieX (24) on 19, Nov. 2013 14:40 (HKT)
first AC on wii u
if u crave action adventure on your wii u, get this game now. fantastic game and do not have to worry about not having played the previous AC games. you will still enjoy this!
Fara0n444 (170) on 10, Oct. 2013 13:14 (HKT)
Wii U - US Version.
The game is a piece of art in every aspect, you just need to play it at least once!
The reason for 4 stars is because I don't have a PS3 or XBOX 360 so as a Nintendoman I must say that they should have re-released the other two previous versions first and then release this one. I feel I'm missing something and that is just sad.
dih_cs1987 (33) on 16, Sep. 2013 20:06 (HKT)
Great version!
The graphics are improved from de PS3 and 360 versions!

And the functions with the Wii U gamepad are great!