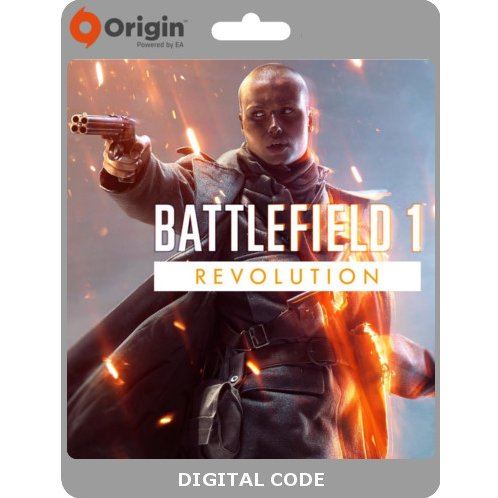 Region Free
This item will deliver instantly in your account. Some orders may be subject to verification by SMS or Voice which may cause delays.
US$8.51
Manufacturer
Electronic Arts
Price
US$8.51
Play-Asia.com Return & Refund Policy
Click on a thumbnail to see more pictures for Battlefield 1 [Revolution Edition] (Origin)

Join the strongBattlefieldcommunity and jump into the epic battles of The Great War in this critically acclaimed first-person shooter.Battlefield™ 1 Revolution Editionis the complete package at a great value containing:

Experience the dawn of all-out war inBattlefield 1. Discover a world at war through an adventure-filled campaign, or join in epic team-based multiplayer battles with up to 64 players. Fight as infantry or take control of amazing vehicles on land, air and sea. And adapt your gameplay to the most dynamic battles in Battlefield history.

Four themed digital expansion packs with new multiplayer maps, new weapons and more. Two-week early access to any unreleased expansion.
Battlefield 1 They Shall Not Pass: The hardened veterans of the French army make a stand in a brutal defense of their homeland.
Battlefield 1 In the Name of the Tsar: Enter the largest front of World War I with the Russian army in blistering winter.
Battlefield 1 Turning Tides: Participate in the amphibious warfare of World War I.
Battlefield 1 Apocalypse: Go over the top in hellish infamous battles during the most cataclysmic time of the war.

Fallout 4: Game of the Year Edition STEAMdigital
US$ 11.49

No reviews for Battlefield 1 [Revolution Edition] (Origin) yet.