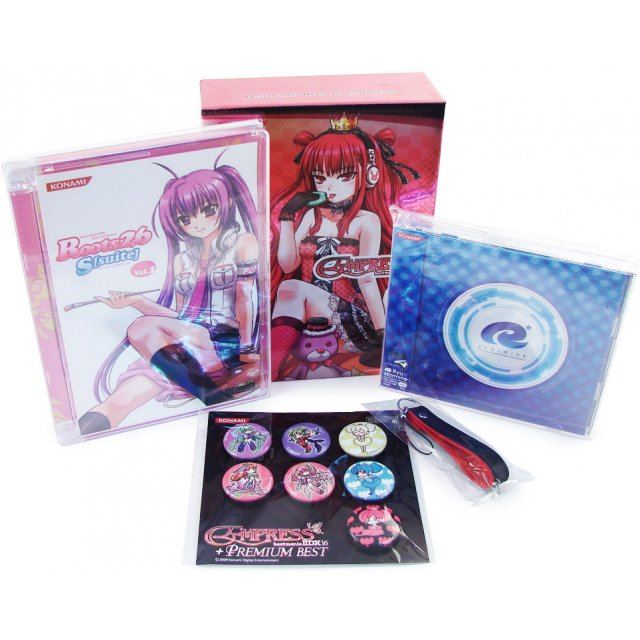 Keyboards, turntables and cues that fall like flower petals, the DJ simulation beatmania IIDX changes your living room into a live stage. With “Empress” as its theme and rose pink as its image color, the game is full of grandeur and high tension dance beats.

The game comes with the Empress Disc, a twin CD album that collects all songs from the arcade version and original songs written for the PS2 version. Besides new songs, there are also fan favorites from throughout the beatmania IIDX history. With a large array of music from numerous genres, this package is indeed fit enough a present for all empresses.

If you are familiar with beatmania IIDX 16 Empress + Premium Best [Konamistyle Special Edition Complete], why not let others know?

I love the Arcade Poster which is included in the complete Set, everyone is asking me where I get this from :)
jneelwr (1) on 20, Nov. 2009 18:15 (HKT)
beatmania IIDX 16 Empress KSSEC
Easily one of the best CS games. While the Empress disc is great and has a bunch of songs with some pretty good revivals, the Premium Best disc is pretty awesome. If you're like me and you have every CS release, you know that it's a little troublesome to switch games if you want to play a certain song from a certain style. If it was a good song, odds are it's on the Premium Best disc, along with a ton of other great revivals.

All the other little goodies are pretty cool too. The Poster is huge and looks great in any game room. Ryu*'s Starmine album is absolutely incredible. The Roots26 spin-off drama is probably good, but since I'm not fluent enough in Japanese to understand what's going on so I can't really say much about it. The CS collection CD was pretty "meh" to me, however the Visual Emotions DVD was pretty awesome. And the little button pins with the smooooch and GOLI characters are adorable.

tl;dr, overall a great selection for newcomers to the series and veterans alike.
stefankoroma1 (4) on 17, Nov. 2009 21:12 (HKT)
Just fantastic!!!
Omfg!! This pack is sooo amazing! double disc, double fun! I dont find the right words to describe it! Yeiiiii!!!
Heikai (11) on 15, Nov. 2009 14:07 (HKT)
Awesome game
Great game and nice bonus stuff. I love the gigantic poster and Ryu's new album :)
ddrst09 (2) on 11, Nov. 2009 01:09 (HKT)
Absolutely AWESOME, Konami couldn't have done better
I am relatively new to the IIDX series. I started playing this spring, and I can say that it has to be one of my favorite game series of all time. For anyone that hasn't played this series, I can safely say that it has to be the BEST music game out there right now. I strongly suggest that If you haven't played IIDX yet, you pick this release up.

Now on to the actual product. I loved all of the items that came with this release. The game is obviously awesome, the starmine album by Ryu was absolutely amazing, the CS songs disk was a very nice (and needed) addition to the set. I haven't been able to watch the visual emotions disk yet, because I need to find a way to play DVD's from other regions, but I can assume that a collection of Bemani music videos would also be great. The roots26 cd is also kind of nice, but keep in mind that its only an audio cd with japanese dialogue, so it won't really be worth having if you can't understand the language. It does come with a booklet with a few nice illustrations in the front though. The pins that came with the complete set were a very nice addition, I put some of them on my backpack. The cellphone strap can double as a keychain strap, which is what I use it for since my phone doesn't have a hole in it to attach the strap to. The visual emotions 8 DVD, game, and CS collection CD arrived inside to e special edition box, and I will say that the art on the box is beautiful, and really completes the set. The final edition to the set is the poster, and wow is that thing HUGE! The poster is the same image as the front of the game box, and the image is very high quality despite its massive size. The poster was shipped rolled up in a large cardboard roll, so you don't have to worry about it coming in all folded up.

Now on to the game itself. With 2 disks and 198 songs between the both of them, this game is the perfect game for veterans and newbies alike. The empress disk has all empress songs, some revivals, and 2 preview songs from beatmania IIDX 17 SIRIUS: BAD MANIACS and DOMINION. ( BAD MANIACS must be unlocked ) The premium best disk has almost 100 revival songs all the way back from 1st style. Honestly, they could not have made this game any better, and with it being the final IIDX game for the ps2, they didn't disappoint. Buy the complete set, and you won't be disappointed!
1 »