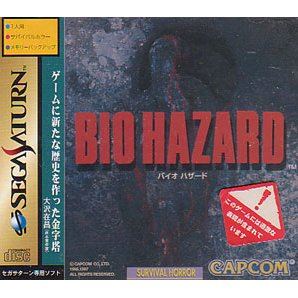 Capcom
Compatible with Sega Saturn™ (Saturn)
For JPN/Asian systems only.

sold Out of print / Out of stock.
Manufacturer
Capcom
Compatible With Sega Saturn™ (Saturn)
Version


Click on a thumbnail to see more pictures for BioHazard

A team of S.T.A.R.S (Special Tactics And Rescue Squad) members are called to investigate a series of murders near Raccoon City. While searching the woods near the city, the team is attacked by something and they have to retreat in a mansion nearby. A big mistake... Player chooses between Jill Valentine or Chris Redfield and starts to explore the mansion, and it soon becomes very clear that it isn't just any mansion, but a hellish place where the undead walk the corridors and other horrors are lurking in the darkness, waiting to eat some heads. While solving puzzles, collecting stuff and shooting monsters, the player has to unravel the mystery behind this mansion and -if possible- get out alive.

If you are familiar with BioHazard, why not let others know?

arkane_signal (16) on 10, Jan. 2008 03:50 (HKT)
Great version!
The polygons and the pre-rendered backgrounds are much smoother than its PS1 counterpart. There are new enemies, the "Battle Game" sub-game, new variations of the default costumes, and last but not the least... WESKER AS A ZOMBIE! XD
org on 05, Aug. 2005 01:32 (HKT)
The best Biohazard
This is the best Biohazard. It has a battle mini game, new enemies, and new costumes. Buy it!!!!!