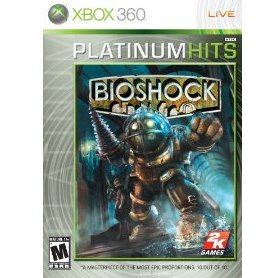 2K Games
Rated
By Our Customers
Compatible with Xbox360™, Xbox One™

Works on all systems sold worldwide, a correct regional account may be required for online features.
24h In stock, usually ships within 24hrs.
US$21.99
Manufacturer
2K Games
Rated By Our Customers
Compatible With Xbox360™, Xbox One™
Version

Works on all systems sold worldwide, a correct regional account may be required for online features.
24h In stock, usually ships within 24hrs
Price
US$21.99
Play-Asia.com Return & Refund Policy
Click on a thumbnail to see more pictures for BioShock (Platinum Hits)

If you are familiar with BioShock (Platinum Hits), why not let others know?

quake_ranger73 (143) on 11, Sep. 2012 22:39 (HKT)
X360 also GREAT!!
Bought the X360 version. Original classic. Creepy gameplay but hours of fun. Big-Daddy kick-ass
ramo1606 (6) on 24, Dec. 2011 12:17 (HKT)
Excellent game
Best shooter this gen.
inaka_rob (196) on 20, Oct. 2011 07:36 (HKT)
Too much like the games that inspired this one
I am a huge fan of the other RPG FPS games that came before this one. System Shock series, Dues Ex series. The guys who made BioShock also made System Shock, and the story elements and character elements were 100% the same as the system shock series. System Shock 2 had almost the same story as System Shock 1 but was greatly updated, so I could over look the story and character similarities. They lost the rights to System Shock so they made Bioshock, but BioShock is EXACTLY like System Shock 1 and 2 simply in a different setting. 3rd time is not a charm for me, its lazy. That being said the game looks great, and is tons of fun. IF you have not played the system System Shock series to death like I have then this is a FIVE STAR game for you. It was simply far to predictable for me.
Amanda (13) on 30, Aug. 2011 03:23 (HKT)
Best FPS single player.
Excellent game, great graphics, cool history and original gameplay.
anshul_doc (38) on 22, Aug. 2011 16:31 (HKT)
FPS hybrid with Horror
One of the best games with an awesome story & great campaign.
1 »