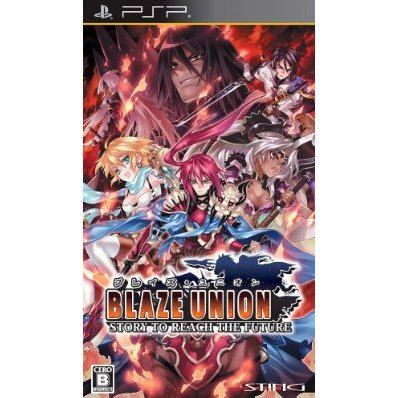 Works on all systems sold worldwide, a correct regional account may be required for online features.
1-5d Expected stock arrival within 1-5 days.
US$36.99
Our previous price:US$ 69.90
You save: US$ 32.91( 47% )
Manufacturer
Sting
Compatible With Sony PSP™ (PSP™)
Version

Click on a thumbnail to see more pictures for Blaze Union: Story to Reach the Future

Created by STING of Yggdra Union fame, Blaze Union is a fantasy strategy RPG that satisfies both your desire to train your brain and your eye for beauty. Since the subject is serious, the characters are scaled instead of large eyed chibis. Drawn by Misaki Rui, the graphics are filled with life and will take your breath away.

Think out your attack strategy and anticipate your enemies's. Take turns to defense and attack, manipulate your regiments, magic and attack forces through cards. Depending on the wars you win and the paths you choose, you get to different endings. For a happily ever after, use your forces wisely.

The battle scenes are fully voiced and you get to hear the spells being chanted by famous seiyuus such as Horie Yui (Vampire Knights: Kurosu Yuki) and Tanaka Rie (Gundam Seed: Lacus).

Blue Roses: Yousei to Aoi Hitomi no Senshitachi
US$ 16.99

If you are familiar with Blaze Union: Story to Reach the Future, why not let others know?

Hayato01 (503) on 23, Mar. 2011 09:45 (HKT)
Great Prequel
If you played Ygdrassil union, then to just let you all know that this is its prequel. The multiple endings are enjoyable and keeps you playing till you see the whole ending you can get.
treize (2) on 23, Jan. 2011 21:36 (HKT)
The Multi Ending rules !
One of the best tactical RPG games I've ever played. The battle system is very different from Final Fantasy Tactics and yet very interesting.

One of its aspects that interests me so much is its multi ending aspect. I finished the game once and I think I got the bad ending. However, after reading an FAQ, I think the story of the bad ending is the best one !
feralphoenix (3) on 26, Jun. 2010 08:54 (HKT)
A Prequel Worth Playing
As a gamer who has adored Yggdra Union since it was first localized for the GBA and a longtime fan of the Imperial Army, I've been following Blaze Union since it was first announced--and now that I've gotten to play it, I'm happy to see that it's delivered.

Much like Yggdra Union, Blaze Union has a lot of gameplay depth and is beautifully rendered. At first it was a bit disconcerting to go from Kiyudzuki Satoko's cute and imaginative designs to Kousaki Rui's more classical yet beautifully shaded artwork, but I got used to the change quickly. There are a few minor glitches in gameplay and a slight sound lag, but neither are problematic in the long run, and Yggdra Union's systems have been streamlined for greater ease of play.

The feature I was most looking forward to--the story branches--was a wonderful addition. The Dept. Heaven series tends to have multiple endings, but these are usually based on a choice you make towards the end of the game and do not have much effect on the story other than the ending itself, but Blaze Union has multiple paths almost as if it's a visual novel. It was very interesting to see what exactly led up to Yggdra Union, and also to get the chance to try to reach a better future.

All three of the paths (Garlot's, Aegina's, and Thortie's) are well-written and diverge widely. I do kind of wish that more characters were given the chance to take the spotlight (where's my Nessiah good ending, Sting?!), but that's probably just me being greedy. There's a lot of replay value here between the mission choices and the different endings. Thus far, I think that Aegina's path is my favorite.

Hayashi Shigeki's score is beautiful as ever, and I definitely plan to spring for the OST and the artbook in the future!

Prospective buyers should remember that Blaze Union is a highly cerebral game and thus not for everyone, and as compared to the other Dept. Heaven games, there is more mature subject matter (human trafficking, attempted sexual assault, etc.) that some players may have trouble handling. Still, I think these things are beneficial to the story and help to illustrate the troubled times the heroes live in.

The only two things I'm actually dissatisfied with are the recasting of most characters (their old voice actors were replaced with more mainstream people) because I liked some of the old cast better, and the way Nessiah is written in Thortie's path (he felt a bit out-of-character to me compared to the other games).

Still, the sheer amount of awesome in this game is more than enough to outweigh those flaws. Definitely a must-buy for anybody who likes well-written and emotional strategy RPGs and fans of the Dept. Heaven series!