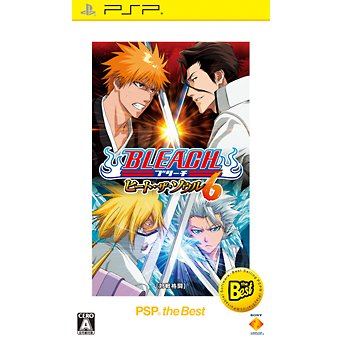 sold Out of print / Out of stock.
Manufacturer
Sony Computer Entertainment
Rated By Our Customers
Compatible With Sony PSP™ (PSP™)
Version


Click on a thumbnail to see more pictures for Bleach: Heat the Soul 6 (PSP the Best)

Single and Tag battles are no longer separated in this ultimate battle between souls. Challenge yourself and take down a tag team with one player character or form a team with new people who entered the battle roster.Boasting the largest playable character database and amount of customizable functions, this installment takes care of the challengers as well as the novices. Besides play mode, the game encapsulates the whole of the Bleach plot in 1 UMD. From the prelude which stars Kisuke Urahara as the protagonist to the recent battles between Ichigo and Aizen's group.

If you are familiar with Bleach: Heat the Soul 6 (PSP the Best), why not let others know?

xzavierl (1) on 29, Nov. 2010 06:25 (HKT)
Awesome!
Great game covers the whole series up to the hueco mundo arc. Great fighter and a must have for any Bleach fan.
pimpingthejesus (1) on 06, Oct. 2010 03:13 (HKT)
great fighting game
If you a bleach fan then this is a must! It's the biggest character base in the series so far 74 in total and has great animation scene. The game still gives you the option for tag team or single player vs battles. On top of that there's four different fighting styles for each character. Great fighting game and then its bleach on top of that. What else can you ask for?
kurosaki isshin (1) on 04, Oct. 2010 00:58 (HKT)
hetgh5e
i just ask can anybody tell me does heat the soul 6 work on finland psp
fly2u401 (2) on 09, Aug. 2010 12:44 (HKT)
Best!!
Don't doubt! Must get it if you are a Bleach fan.
Great game!!
benlove (4) on 10, Jul. 2010 11:47 (HKT)
Heat the soul
I found that bleach heat the soul six was an accurate adaptation of the anime merged with a fast paced battle engine, along with the multiple game modes including story mode, soul championship, Vs cpu and arcade mode has hours of enjoyment waiting. The user is not limited by the language because the menus are strait forward and has some basic english for the main menu objects.
All in all this was one of the best psp games i have bought and will try to buy the next game in the series when it comes out.
1 »