Welcome to The VR Saloon, the latest on VR gaming! 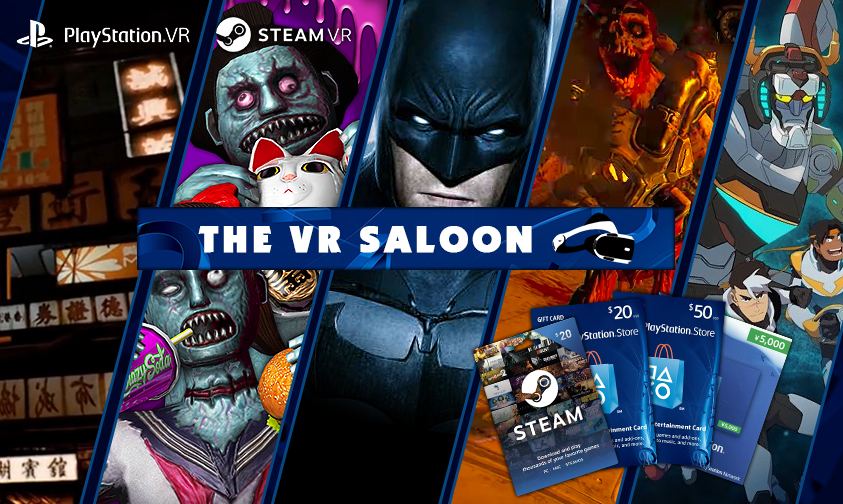 Grab a drink and enjoy! Some bars are known for their views, while others are known for their cocktails, but only this one can give you the most immersive, visually astonishing, ooh and aah experience! Put on the visor because the doors of the VR Saloon, the new club focused on VR games, are official open!

There was nowhere else in the world like the Kowloon Walled City, this architectural complex made by more than 300 high-rise buildings, interconnected by a huge maze of dark corridors, was probably one of the most densely populated place on earth, a city in the city located in the heart of Hong-Kong’s Kowloon District.

Kowloon’s Gate VR Suzaku is the new VR version of the cult game originally released in 1997 for PlayStation One. The adventure starts on June 22, 1997, the Kowloon Walled City is just a memory of the past due to its demolition and now it exists only in Yin realm of the world, but suddenly it reemerged from there to re-take its own space in the Yang realm (the realm of the living ones). After this event, the Hong-Kong Supreme Feng Shui Council has declared that if the two realms will be not divided again, a very tragic era will start.

To rebalance the Yin Yang forces, you, the Supreme Feng Shui Master, must wander through the Kowloon Walled City in search of the four sacred symbols that could set the things right, interacting with a plethora of bizarre characters you’ll live a unique adventure where cyberpunk elements are melted with the Taoist traditions on your PS VR.

From days of long ago, from unchartered regions of the universe, comes a legend: Voltron Defender of the Universe!

Composed by five mighty robot lions, Voltron is the last hope of the inhabitants of the planet Daibazaal against the evil conquering plans of Zarkon, the tyrannical and merciless of the Galra Empire. Piloted by a team of five intrepid space Paladins, they can assemble the Red, Green, Blue, Yellow, and Black Lions to bring to life Voltron, the ultimate defender of the freedom and the only robot who can face the hungry ambitions of Emperor Zarkon!

Based on the latest TV series, DreamWorks Voltron VR Chronicles will let you jump into the action of one of the most beloved cartoons of the year, piloting the Defender of the Universe, your mission is to put an end to the Zarkon’s plans, and discover the ancient secret of the universe enjoying a truly cosmic experience like no other in the whole galaxy on PS VR and SteamVR

Do you know what REALLY means to be the world’s greatest detective? Well, from tonight you’ll have this unique opportunity to see the world through the eyes of Bruce Way…er Batman!

No parties, beautiful cars or huge manors awaits you, but a long descent to the worst, most dangerous streets of Gotham City with Batman Arkham VR. The new action-adventure bat-VR game developed by those great guys of Rocksteady will bring you into the night when both Robin and Nightwing suddenly disappeared. You have few hours to unravel what happened; solving gruesome puzzles and fighting against the most famous bad guys of comics’ world such as Penguin and Joker, you’ll experience in first person the most tragic and personal case of the caped crusader.

Luckily you can count on the advanced gadgets inside the bat-belt, using them cleverly with the precious aid of your extreme combat skills, and obviously, of Alfred.

Use PS VR and SteamVR, and don’t let Gotham City fall into darkness.

From Mars with love!

The future of our planet rests upon your shoulders. The red planet is still full of demons and many other hellish creatures who awaits only to feast on your flesh, in DOOM VFR, you are plunged into a desperate mission to kill everything in front of you! Prove that you’re a gutsy space marine with displaying vulgar power and what you can do with a weapon!

Wearing the VR headset, everything stops being a game and becomes reality, you’ll realize that YOU are the marine and the demons want you dead once and for all. Fires on all with the most explosive artillery and if you’re short of ammo the punches will help you to escape from the predicaments. Test your strategic skills to provoke a lot of damage with the minimum number of bullets, and explore every single corner to unlock even more deadly weapons to attack and outsmart foes.

Pump the adrenaline with DOOM VFR for PS VR and SteamVR

Creativity in food is always a great thing, even in a VR game! The end is near, hordes of zombies haunt the streets of all cities of the world, and if you’re a street-food trader the best things you can do is to prepare delicious Triple Cheese Big Beef Rustler Burgers for your unconventional customers, so good that they could return to their previous human form, because you know fine food can save the day, even the worst one!

From the first bite of the burger to the last fry, all must be prepared in the best way possible, your mission is to offer the best food in town, with a lot of side dishes. More zombies you’ll satisfy and more new customers you’ll acquire. From young students to an awe-inspiring sumo wrestler, cook, feed and make happy them to change the undead into active members of society.

Create unique and designed menus, and be innovative and thoughtful. Your customers will appreciate a good appetite and will love good old-fashioned hospitality with Pixeljunk VR Dead Hungry, now available for PS VR and SteamVR devices.

Do you like the new appetizers proudly offered you by the VR Saloon? Now press start, grab a drink, and talk about VR gaming trends with our passionate staff members while you’ll witness the birth of a brand-new era of immersive entertainment.