Hold up your excitement Otaku fans. If you are playing Boku no Hero Academia: One’s Justice, you might be aware that Izuku Midoriya is a fan-favorite in the manga and the anime series. Deku is coming as he trains his legs to work in the latest DLC of this game.

In the latest issue of the Weekly Jump, Izuku Midoriya’s Shoot Style will join as a free downloadable content character. If you watch the anime or read the manga, the Shoot Style is the alternative for Izuku. In the recent episodes of the anime, after his greatest idol slash hero, All Might suggest that he uses his legs rather than his arms which is seriously damaged. Deku’s Shoot Style has faster attack techniques than any other characters in the roster.

But that’s not all, a Pro-Hero is coming as a DLC character! The silhouette points to the Number Two Pro-Hero, Endeavor. However, he’s available with pre-orders in the Western version of this game.

For the overview of the game. See it below.

Whether you want to see the destruction of humanity or believe heroes should defend those in need, fight to prove your justice in MY HERO ONE’S JUSTICE. The popular Weekly Shonen Jump manga series comes to life, as players experience the abilities of fan favorite characters such as Izuku Midoriya, Katsuki Bakugo, Tomura Shigaraki, and many more in this arena brawler, where you’ll get to choose between hero and villain in your path to justice.

Utilize Quirks and call upon your side-kicks to activate powerful attacks where your environments are at your disposal in total field destruction. The battle doesn’t just confine you to the ground – take the fight upwards where buildings and walls become a part of the action. – via Bandai Namco

Boku no Hero Academia: One’s Justice is now available on our website for PS4 and Switch. Get the Japanese retail version here. Click the button below to buy yours now! 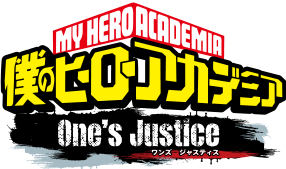 GET YOUR QUIRKS HERE!

This game is also available digitally. So grab your PSN and Nintendo e-shop cards below. Buy now!

Do you want to have some exclusive deals with us? Well, sign up for our newsletter. Click the button below!