Starting the publication in 1923, the fantasy and horror pulp magazine Weird Tales is still today one of the most renowned and influential literary magazines of the 20th Century. During its long stories it has hosted all the big names of the fantastic literature; just to name a few Robert E. Howard, Ray Bradbury, and above all H.P. Lovecraft. Thanks to their works Weird Tales was a legend both in the U.S.A. And abroad, with many authors that made it a very unique magazine.
The February 1928 issue, in particular, is remembered for having given birth one of greatest pop-mythos of all time; Cthulhu, publishing its first short story entitled “The Call of Cthulhu”!

Accordingly, the tale, the origin of it has been “found among the papers of the late Francis Wayland Thurston, of Boston” and his incredible discovery of a bas-relief sculpture that mix the shapes of an octopus, a dragon, and a human caricature. This odd works of art have been manufactured by Henry Anthony Wilcox; an art student of Rhode Island which has been inspired by weird dreams of “great Cyclopean cities of titan blocks and sky-flung monoliths.” Publicly regarded as a true masterpiece by Robert E. Howard (the creator of Conan), this ambitious and complex short story has been adapted in a silent film, a card game, a radio drama, a role-playing game, and now a dreamy video game for PS4 & XB1; Call of Cthulhu!

Set in the windy and foggy Darkwater Island near Boston during the roaring 20s; this survival horror RPG follows the story of Edward Pierce, a P.I. which has been hired to investigate a suspicious suicide. His quest for truth will drive him into a dangerous maze built by mental insanity, ancient cosmic creatures, and unfriendly people. Indeed many secrets are concealed below the island’s shores plunging yourself into a waking nightmare. Prepare to walk along secret passageways, gloom-filled asylums, shadowy warehouses, and many other threating locations…
In all of them, you’ll hear ancient howls that resound from the deep. Witness the omnipresent weight of dread and a true sense of evil in the spine-tingling Call of Cthulhu for PS4 and XB1!

Smash the (apparently) peaceful tranquillity of Darkwater Island, during your investigation you must talk with a dynamic cast of villagers, some of them will help you, but some other will try to stop you with all their might because you know…ancient gods are very susceptible. Whispers may reveal more than their literal meaning, granting them access to ancient rituals hidden deep in the shadows. Delivering the most cinematic horror experience of the century, Call of Cthulhu for PS4 and XB1 is a pulp interactive drama in which you’ll surely experience the wrath of the ancients during your efforts to protect the whole planet from the advent of the Elder God!

Detective Pierce, you’re the ultimate hope to fight off the cosmic demonic being. Will you succeed? Well, there is no option… the alternative is a literal Hell on Earth! The Great Dreamer is about to wake up, prepare yourself digitally or physically with Call of Cthulhu for PS4 and XB1!
Ph’nglui mglw’nafh Cthulhu R’lyeh wgah’nagl fhtagn!

In addition, if you’re a real fan of H.P. Lovecraft don’t forget to show your passion clicking on the cute Chtulhu-chan here below for a wide selection of ultra-pop merch! 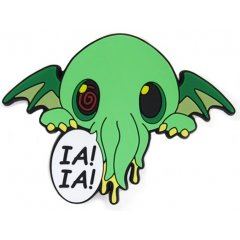