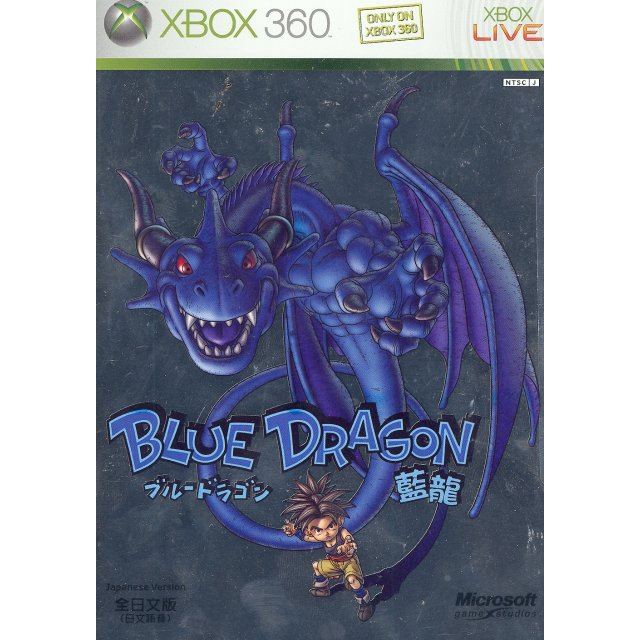 Collections
Microsoft
Rated
By Our Customers
Compatible with Xbox360™ (X360)

sold Out of print / Out of stock.
Manufacturer
Microsoft
Rated By Our Customers
Compatible With Xbox360™ (X360)
Version

Famed game producer Hironobu Sakaguchi of Mistwalker and developer Artoon present the highly anticipated Xbox 360™ exclusive Blue Dragon. Featuring the character design of Akira Toriyama of Dragon Ball Z and music by Nobuo Uematsu of Final Fantasy, Blue Dragon is an epic role-playing game that centers on a young boy named Shu and several of his friends.These unlikely heroes possess the power to control phantom shadows that mirror the actions of their masters, giving Shu and his comrades miraculous strength and magical powers.The warriors can create and develop their combat styles by utilizing different types of Shadow Change, including Sword, Assassin, and Power Magic. Shu and his friends must use the shadows as weapons and wield their skills to save their world from impending doom.Encountering various people on a planet where numerous ancient ruins remain, the characters and their shadows travel through a world full of mysteries and illusions, where the slightest touch can cause reactions of unparalleled magnitude.

If you are familiar with Blue Dragon (Japanese language version), why not let others know?

hiddenryu (20) on 07, Jul. 2007 06:27 (HKT)
No title
Honestly Blue Dragon, I was quite suprised by this game.
It s kind a mix of Final Fantasy and Grandia. ( the system is rather based on Grandia than on Final imo )
The 1st DVD drags on and on, but the 2nd and 3rd one are pretty fun and it can be really entertaining.
This game holds content for about 40h, 30 of them are worth the time.
Well, the story is also interesting, here and there a little too predictable but not bad though.
The graphics are impressive as well, from time to time, you can hardly distingush between prerederned and in game FMV!
The sound is...ok, old school FF mix.
Gameplay can be boring ( just like FF was ) but
either ways you wont regret to finish this game!
[This review is based on another version of this product]
PuNiao (365) on 23, May. 2007 14:58 (HKT)
Blue Dragon
Despite the involvement of Hironobu Sakaguchi, father of Square Enix\'s world-renowned Final Fantasy (FF) role-playing game (RPG) franchise, expect in Blue Dragon not the convoluted character-driven storyline of your average FF, but simplistic fare that is mostly as an excuse to propel the protagonists to their next dungeon. The lack of plot might bother you initially, but is soon forgotten once you get a taste of the excellent character growth and combat mechanics in here. Protagonist Shu and friends each possesses a shadow creature that can be placed under any of nine inter-changeable shadow categories representing such typical RPG roles as the warrior, elemental mage and thief. Each category caters to its intended role by granting practical statistic bonuses and a basic category skill.

As the category\'s rank (a shadow\'s equivalent of character levels) increases, the bonuses snowball, and advanced category skills are unlocked. Only four advanced category skills can be equipped at a time, but the good news is that they can be equipped independent of the character\'s shadow category, allowing conscientious players to mix and match for improved results. Although the shadow category system is derivative of older FF games, it works well. Genre veterans will be pleased with how familiar and flexible the nuances feel. but not everything is derivative.

Intoducing simultaneous encounters, a revolutionary feature that makes the process of ranking up and unlocking skills much less mundane. Monsters are visible in the dungeon areas your party explores, so enemy encounters are triggered when you come into contact with one. So addictive are the combat mechanics that it is disappointing whenever there are distractions to lengthen the quest. The biggest beef: the ridiculous amount of out-of-places objects - cupboards, pillars, trees and rocks - you can search for gold, items or experience points. Annoying as it may be to examine every little nook and cranny, the rewards are too substantial for you to pass up.
[This review is based on another version of this product]
rforce80 (158) on 09, Apr. 2007 10:57 (HKT)
Fantastic!!!
This game reminded me an ultra-high RPG classic: Skies of/Eternal Arcadia... and this is very good!!!
Graphics are incredible in an artistic way. The soundtrack is very cool, the voice cast is amazing, simply perfect...
Everything about this game is over the top... this is the supreme 360 title by now, an instant classic.
Hey, japanese gamers: now you have a BIG reason to purchase a 360... this game is far better than any Wii or PS3 title by now...
Purchase it and you\'ll not regret!!
onin322 (2) on 04, Jan. 2007 06:01 (HKT)
Goog game for the 360 only...
It\'s a Japanese version and doesn\'t include english subtitles for you to understand what is being said. Be patient and wait until an english version is released if you care about it.
[This review is based on another version of this product]
dodo head on 02, Jan. 2007 09:48 (HKT)
excellent
sick game
1 »