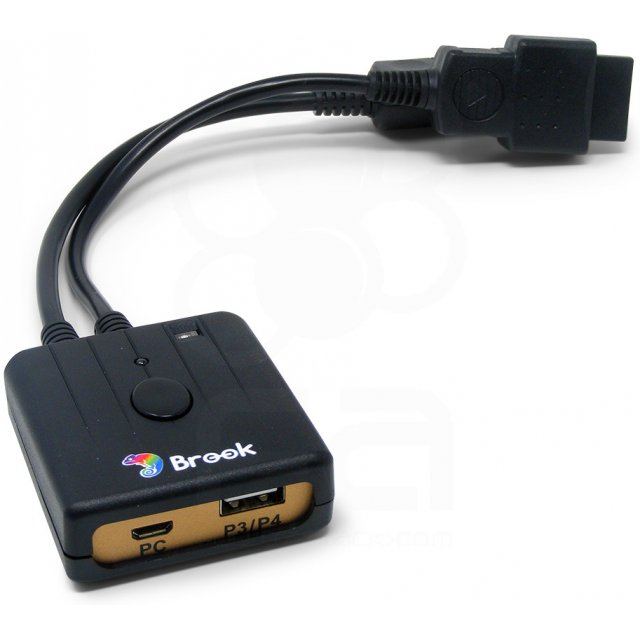 With the Brook Super Converter, you can use existing PS3/PS4 controllers to play on your Dreamcast console and on PC. The converter also allows you to customize your button layout and to add a turbo button to hold, original and 3rd party controllers. Game Controller Super Converters – PS3/PS4 to Dreamcast Controller Adapter is compatible with your gamepad, fighting stick, and more.
The interface of USB of the converter permits hot swapping. The converter also supports Xinput and vibration of controllers.

If you are familiar with Brook Wingman SD to Dreamcast Converter, why not let others know?

[This review is based on another version of this product]
danbal76 (105) on 08, Apr. 2020 16:41 (HKT)
Impressive!
I'm using it on my PS2 with a Dual Shock 3 controller. Works flawlessly! I couldn't see any noticeable input lag.
[This review is based on another version of this product]
ghostlyavenger (47) on 29, Aug. 2019 06:39 (HKT)
great adapter
works as intended, if you update the firmware it also works with the xbox one controller for both switch and ps4. Nice to have options.
Ps. If you are using XBO or wiiu pro controller on the ps4 the shortcuts for share are minus+L and for touch minus+R.
[This review is based on another version of this product]
linandrew881 (1) on 27, Aug. 2019 01:29 (HKT)
Works great on both Switch and PS4!
I bought this because I love the Switch Pro Controller and really wanted to use it on the PS4 as the Dualshock doesn't feel comfortable for me after awhile. Instructions were all in Japanese but it was all pretty intuitive to sync up. Just press the big red button until it flashes then hold the Sync button on your controller and you're good to go!

I was also able to successfully connect a Dualshock controller to the Switch. There's a few things to know to get it to work, but once you change the settings it works flawlessly. First to sync the controller to the converter you need to hold the Share and PS buttons together, the lightpad should flash and then sync after awhile. Next I found you have to change under System Settings > Controllers and Sensors > Pro Controller Wired Communications and turn that option on. Then the Switch should be able to find it when you go to "Change grip/order."
[This review is based on another version of this product]
punkysuen (1) on 31, Oct. 2018 08:33 (HKT)
easy to use
No need to setup, just plug and play. It supports my wireless joystick Qanba Q1W.
[This review is based on another version of this product]
forteii (67) on 07, Aug. 2018 06:16 (HKT)
Great for SNK fighters
Plug 'n play - no errors while playing. Tested for many hours on Samurai Shodown VI (PS4) and both KOF '98 Ultimate Match and KOF 2002 Unlimited Match (Steam) . I only wish it weren't this pricy.

There is one caveat that might seem obvious to some, though. The touch screen buttons exclusive to the PS4 controller don't seem to be mapped on the PS3 counterpart whatsoever ; so for those functions you will need to switch back to the PS4 controller. Overall, a small annoyance imho.
1 »