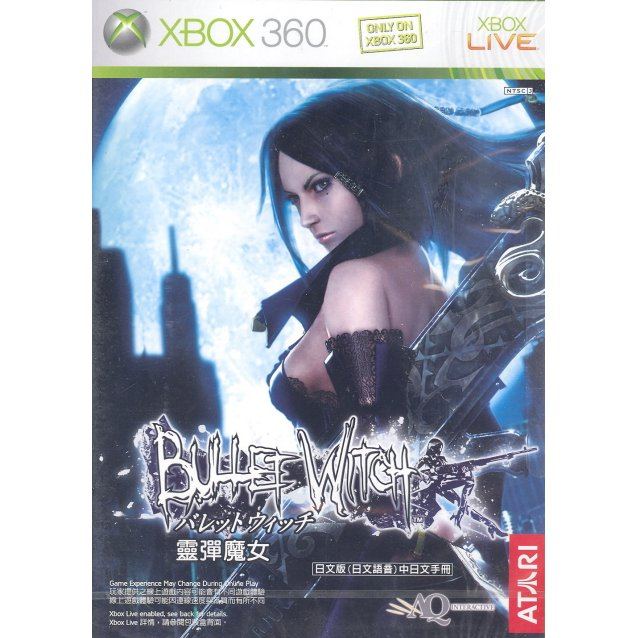 Atari
Rated
By Our Customers
Compatible with Xbox360™ (X360)

sold Out of print / Out of stock.
Manufacturer
Atari
Rated By Our Customers
Compatible With Xbox360™ (X360)
Version


Click on a thumbnail to see more pictures for Bullet Witch

The human race is on the verge of extinction.The human population is being decimated by natural disasters, hunger, war, plague, and by armies of hideous monsters.

The world population has decreased to less than a billion due to the numerous disasters inflicted by these resurrected demons.

Right when everyone had lost hope and accepted the end of mankind as being inevitable, a beautiful lady in black possessing the power of a witch and a huge gun with a silhouette of a "broom" arrived. Her name is Alicia. In a city filled with despair, people desperate to escape from the horrors of death. An armed group of men fighting against the demons while struggling to cling on to what little hope they have left...

Fate may finally be smiling on these people?s desire as the demons continue trying to end that hope.

In this ruined world, the ultimate battle between Alicia the witch and the demons is about to begin...

If you are familiar with Bullet Witch, why not let others know?

newinjapan2002 (143) on 20, Dec. 2006 17:11 (HKT)
It\'s Blood Rayne with demons
Bullet Witch is fun, but it is only an average game. The gameplay is simple and easy to get the hang of, and graphically it\'s not badly made. The way the main character moves and looks reminds me a little of Blood Rayne, in other words, she moves very stiff.
If you are looking for a fun game to kill a day or 2 with, Bullet Witch is great. If you are looking for a game that will stay in your memory and move you, this isn\'t it.
vmor (10) on 01, Dec. 2006 22:36 (HKT)
Amazing game!!!!
This game is awesome!!!!! Very good game and very good price!!!! Some menus are english only menu options, the story voices and texts are in japanese.
Anonymous on 04, Nov. 2006 13:24 (HKT)
Awesome game
This game is brilliant, you probably won\'t understand the storyline if you don\'t speak Japanese, but the menus are in English, just make sure you turn Autosave on in the options, otherwise you\'ll forget to save when you finish a level and spend 1 hour in frustration trying to do the next level.

It\'s a good game, six levels, each lasts for about up to an hour, the final boss is VERY hard, but just attack it\'s weak spot constantly.

Great game, recommended.
Rees on 30, Oct. 2006 22:51 (HKT)
English Language
I have heard that this game has English menus and some subtitles, is this true? Do you think it would be playable by someone who understands absolutely no Japanese at all, or is it time for me to learn?