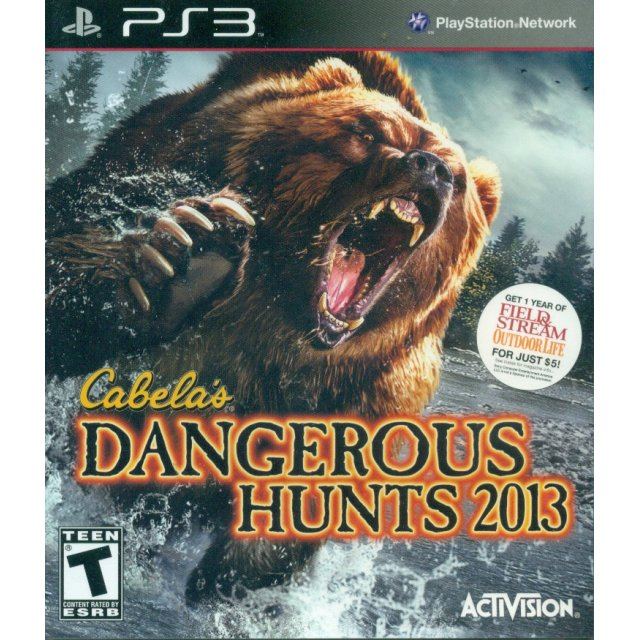 Works on all systems sold worldwide, a correct regional account may be required for online features.
1w Expected stock arrival within 1 week.
US$22.19
Our previous price:US$ 24.99
You save: US$ 2.80( 11% )
Manufacturer
Activision
Compatible With PlayStation 3™ (PS3™)
Version

Works on all systems sold worldwide, a correct regional account may be required for online features.
1w Expected stock arrival within 1 week
Price
US$22.19
Our previous price:
US$ 24.99
You save:
US$ 2.80( 11% )
Play-Asia.com Return & Refund Policy
Trustpilot
Trustpilot
Click on a thumbnail to see more pictures for Cabela's Dangerous Hunts 2013

[This review is based on another version of this product]
tank2000 (53) on 09, May. 2015 20:08 (HKT)
Ridiculous fun!
Cabela's Dangerous Hunts 2013 has a completely ridiculous premise -- you play a park ranger who somehow ends up in situations where you are required to kill animals -- lots of animals. Moralistic considerations aside, the game's story is so ridiculous that it's actually rather good. You are thrown from one over the top sequence to another with lots to do. The shooting mechanics are actually quite well thought out -- with some sequences being on rails and others requiring you to move and stalk certain animals. Recommended if you are not offended by the idea of wanton killing of so many (digital) animals.
Zeliard (113) on 28, Dec. 2013 13:03 (HKT)
Good game
This installment is better than its predecessors.
rmplucas (50) on 19, Nov. 2013 08:48 (HKT)
Cabela's Dangerous Hunts 2013
Fun in the wild.