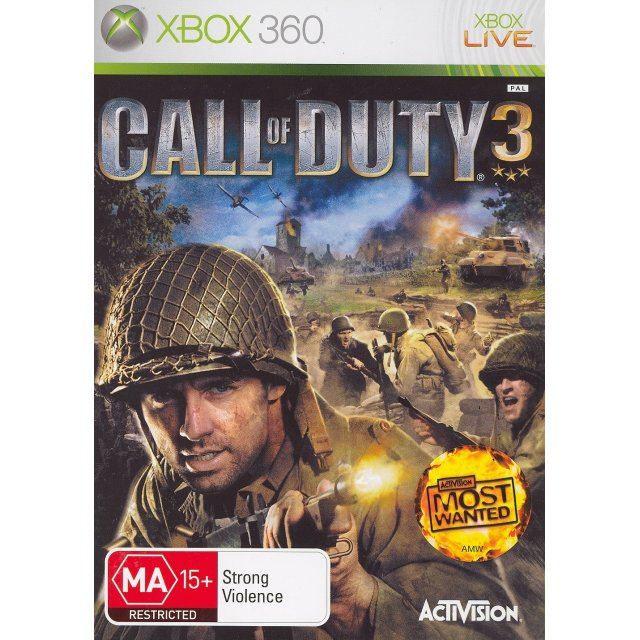 The follow-up to the best-selling next-generation game, Call of Duty® 3 delivers more intense combat than ever before. Follow the Allies on the Normany Breakthrough campaign as they push inland to liberate Paris and take the first step on the path to Berlin.Through a seamless narrative that delivers the rush of unrelenting battle and breathtaking action, players assume the roles of four ordinary Allied soldiers—American, British, Canadian and Polish—and are thrust onto an authentic, living battlefield for an unprecedented variety of combat.Experience advanced high-definition graphics, detailed character animations, and explosive on-screen action, delivering the most immersive and cinematically intense war experience ever.

If you are familiar with Call of Duty 3, why not let others know?

newinjapan2002 (143) on 08, Mar. 2007 20:58 (HKT)
Excellent Shooter
Another great COD game! The gameplay is excellent, although I also wonder about the jump button. What is the point of it? You can\'t jump over anything in this game.
The best part of this game for me is the cohesiveness. Unlike COD2, all of the missions are part of the same campaign, so characters you were fighting alongside in one mission often turn up making cameo appearances in other missions. The whole game has more of a connected storyline and feels complete. One of the things that I disliked about COD until now was the apparent randomness of the missions and the disjointed feel.
A definite buy for any fan of shooters, WW2 games, or action. Graphics are beautiful, sound is great, and even the voice acting is pretty good!
mark103 (1) on 23, Jan. 2007 03:58 (HKT)
Fantastic!!!
Best game out on Xbox 360!
Amazing graphics and detail, just like WWII but with Colour!
5 Star.
chaos242 (1) on 20, Jan. 2007 23:34 (HKT)
Great Game, but...
I think TreyArch could\'ve done much better. I like the feel of COD2 much better...it just feels tighter and much more frantic. Any why can\'t I jump over anything!??!? The multiplayer is where COD3 shines above COD2, allowing 24 players for absolute mayhem. The maps are great too, overall much better than those for the former. Overall, a great game though.
tosadven (3) on 18, Jan. 2007 21:52 (HKT)
Hats off!
This game is very exciting.Always keeps you moving!
Anonymous on 15, Jan. 2007 01:29 (HKT)
Great game!
Too exciting!This is really what real wars are.I\'m in the milltary and fought in Iraq.It\'s something like this only !
1 »