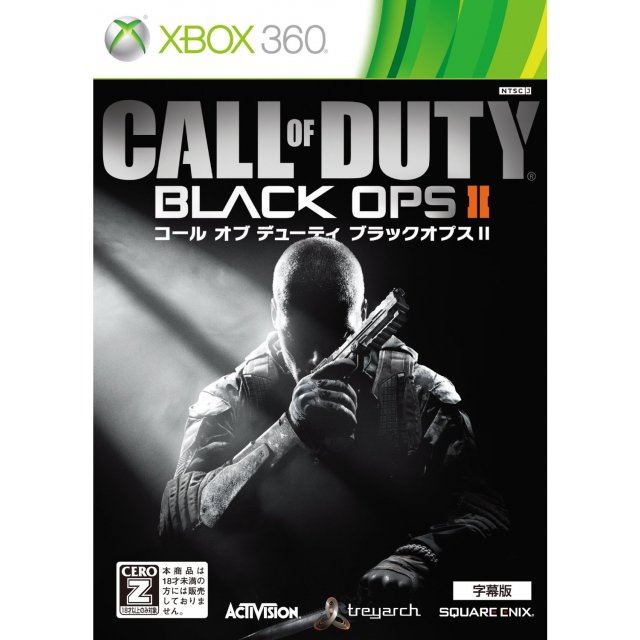 If you are familiar with Call of Duty: Black Ops II [Subtitle Version], why not let others know?

[This review is based on another version of this product]
jayvgames (13) on 06, Jan. 2018 14:28 (HKT)
Eh.
I merely added this to my Wii U title for it adds some extra gameplay mechanics that make this title more desirable and I wanted to show some support for mature titles on the Wii U. But if it never hit the Wii U, I probably would never have picked this title up. The gameplay is smooth and crisp which is what most games should always have and I give it credit for achieving this and integrating the second screen from the Wii U. I enjoyed that. However, I also check games out for story most of all. And this game lacks an interesting or compelling story. The game switches between two timelines; one in 1986 through 1989, and another set in 2025. The 1980s section uses the previous protagonist, Alex Mason, for the overall story of the rise of the antagonist named Raul Menendez. Which, by the way, is one of the only memorable characters you can take away and say is one of the only best things about the game. The 2025 parts go into Alex's son, David's, story and his role against Menendez. Raul has started plotting against the United States and China. Basically, his plan involves getting the U.S. and China against each other in a new Cold War due to his thirst for revenge. The thing that also helps to make this game stick out and is used for the franchise's future games is the use of futuristic tech like; unmanned vehicles, robotics, cyberwarfare, and so on. But other than those things that I mentioned, the story is a snooze fest. There is only two or three characters you can distinguish while the rest is pretty much bland. They try to stick out but they simply fail short at leaving an impression. Alex is sort of eh. David is; well David. I can't even remember the others on how they acted except for Raul which he's pretty intimidating to gaze upon in first person perspective. He also suffered due to a disfigurement of his only family, his sister, and so on that can easily trigger him. Poor guy couldn't take a break. Then you have a teammate of David's, named Harper, who is basically the standout kick every ass you see stereotype but is still recognizable at the end. You also have Woods who is the teammate of Alex who is a pretty **** in the head individual in his youth who can still somewhat rationalize certain situations. Other than those three characters, everyone else I completely forgot. In terms of gameplay, you incorporate some use of futuristic tech, few half assed stealth elements, and mostly what the franchise is known for, blasting anything that moves or shoots back. Not much is new and or makes this game stick out from previous or future installments in my opinion. But what else can you expect from a franchise that releases one of these titles every single November under a publisher that can be compared to as the video game equivalent of McDonald's. If you really want this title in your collection, get this port and enjoy the incorporation they did with the Wii U gamepad. It's very crisp, no screen tearing, and is somewhat good looking with the various locations for each of the missions. If you still want it but for another port, don't bother wasting your money on this cookie cutter. You are way better off getting a far better shooter like the remake of DOOM or a true futuristic shooter like Syndicate. If I was playing this title on another console or even on PC, that score you see from me would be a lot lower. I'm just being as nice as possible with it since the Wii U doesn't have enough mature third-party titles in the states.
[This review is based on another version of this product]
Mcilroy (47) on 05, Apr. 2016 02:39 (HKT)
Call of duty mania.
Love to shoot.
[This review is based on another version of this product]
ishaakriaz (8) on 11, Dec. 2014 15:27 (HKT)
Good!
One of the better COD games.
[This review is based on another version of this product]
Clearco (17) on 21, Mar. 2014 05:32 (HKT)
Gran juego online
Un juego para aquellos que quieran diversión directa y sin complicaciones. Simplemente te conectas a una partida y las horas se pasan volando. Modo zombies mejorado. El único problema es que no pude canjear el mapa que me venía en el DLC ya que a día de hoy no es posible crearse una cuenta sur coreana por asuntos legales con la privacidad.
[This review is based on another version of this product]
1110adrilibra (236) on 18, Mar. 2014 20:31 (HKT)
woo!! the plastic gun on the battlefield!!
The call of duty series graphics all ways the same, the plastic weapon are all ways funny part to laugh about it!! And the story are stupid and easy figure out the next step of the story! it's enemies AI are too empty and defenseless against player!! but still it just a game for babies!!
1 »