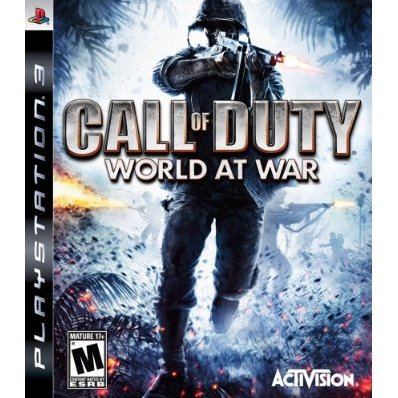 sold Out of print / Out of stock.
Manufacturer
Activision
Rated By Our Customers
Compatible With PlayStation 3™ (PS3™)
Version


Click on a thumbnail to see more pictures for Call of Duty: World at War

[This review is based on another version of this product]
gogoyubarismooth (289) on 20, Jun. 2012 10:04 (HKT)
funny game
funny game
andoy (18) on 25, Jun. 2011 10:35 (HKT)
Nazi zombies! what's not to like?
This is one of the few FPS games I had and only one from the Call of Duty installments. I'm a big fan of WW2 guns and the setting is more appealing to me than the modern times. It just feels better for me to kill nazis and participate in the WW2 than pretend to get involved in unwanted wars in our modern times.

I enjoyed the online game most. I was able to play with a friend from another country and were able enjoy killing zombies.
[This review is based on another version of this product]
hefdfr (29) on 21, Feb. 2011 20:24 (HKT)
It is interesting
Fear of the war is often transmitted.
RAD Gamer (5) on 26, Jul. 2010 10:47 (HKT)
still not too late to buy this
i had numourus opportunitys to buy this game over the 1 1/2 or so but chose to buy other games instead. now that i have it i kinda regret not getting this game earlier, the story line is solid gameplay is fantastic (no suprise here since the gameplay engine is the same as MW2 franchise) and the online community is still going strong too!!!
varun.ranger (38) on 04, May. 2010 08:52 (HKT)
WWII
They don't sell this game in Japan because you kill Japanese people. It is quite bloody, but man this game is amazing. A must have game, call of duty was boosted with World at War! Nazi zombies is a very fun thing to play with friends, it also supports online modes. GET THIS GAME!
1 »