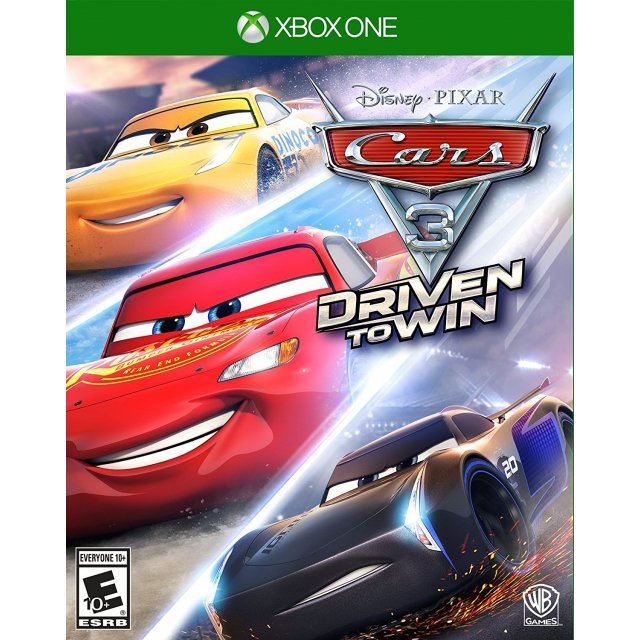 Works on all systems sold worldwide, a correct regional account may be required for online features.
24h In stock, usually ships within 24hrs. (Only 1 left in stock.)
US$21.99
Limited time offer - Secure yours now before the offer expires!

The road to becoming a champion starts with this first look of Cars 3: Driven to Win! Speed into the world of Lightning McQueen, Cruz Ramirez, Jackson Storm and other beloved characters as you determine your path to racing mastery!

Start your engines and gear up for the ultimate racing experience in Cars 3: Driven to Win inspired by Disney Pixar’s film, Cars 3. Play with over 20 customizable characters including Lightning McQueen, Jackson Storm, Cruz Ramirez and the next generation of racers in over 20 tracks set in iconic locations from the film such as Radiator Springs. Train and advance your abilities in 6 game modes and challenge your family and friends in the Battle Race to become the Ultimate Champion. On the road to becoming a Hall of Fame Driver, training and skill will give you an edge in a race that anyone can win.

If you are familiar with Cars 3: Driven to Win, why not let others know?

[This review is based on another version of this product]
athzem (105) on 14, Jul. 2017 12:05 (HKT)
Neither good nor bad
This game is just a so-so one. It has many fan-loving characters and the driving mechanic itself is not bad. But there is no significant thing to talk about except good to play for a while. Please just don't compare it to Mario Kart or you will get disappointed.