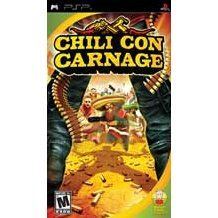 Works on all systems sold worldwide, a correct regional account may be required for online features.
1-2w Expected stock arrival within 1-2 weeks.
US$45.99
Manufacturer
Eidos Interactive
Rated By Our Customers
Compatible With Sony PSP™ (PSP™)
Version

Take on the role of unlikely hero Ramiro Cruz, "Ram" to his friends. Ram is dragged into a high stakes adventure when his father Ernesto is assassinated just before cracking the biggest "traficante" case Mexico has ever seen. After witnessing the murder, Ram along with the guidance his unpredictable uncle Marco, embark to track down the killer.Let loose in the underworld of Los Toros, Ram fights his way to the inner circles of the local kingpin Cesar Morales’ drug cartel. When stumbling onto plans of a gigantic smuggling scheme, Ram must persevere amidst facing deadly gunfights, renegade cops and sinister desperados everywhere. Time to exact some hard-hitting revenge!

If you are familiar with Chili Con Carnage, why not let others know?

FabFelicia (147) on 14, Oct. 2012 14:09 (HKT)
Just shoot and enjoy it. Its fun..!!
hy00ga (324) on 17, Jul. 2012 09:43 (HKT)
so so game
overall so so game
lonely_manbakery (17) on 28, Sep. 2011 04:15 (HKT)
I like it.
This game is just for fun and a lot of shootings. You don't have to care about the storyline.
GTAvPauly (77) on 25, Apr. 2008 18:18 (HKT)
Grab it now
At this price grab 2
PuNiao (365) on 29, Apr. 2007 11:24 (HKT)
Chili Con Carnage
A game with a title like Chili Con Carnage (CCC) makes you immediately link it to a cheesy B-grade movie (Snakes on a Plane anyone?) - something that you just have to watch, Oscar be damned. Happily, its publisher Eidos Interactive has put out a pretty good game in CCC without sacrificing any of the elements that make a B-grade movie great. Expect totally over-the-top characters, corny dialogue and wacky scenarios. Jumble all that with a totally idiot-proof storyline, which has the hero, Ram, avenging the tragic deaths of his father and a bunch of kittens, all killed within seconds of starting the game. In CCC, you guide Ram through various stages of shooting an assortment of Mexican bad guys, who get weirder as the game progresses.

The main attraction is racking up style points. Pressing the X button when shooting at enemies slows down time, Matrix-style. Do this with different directional buttons, and you initiate all kinds of gun stunts. It\'s like playing a shooting version of those Tony Hawke-like games where one scores by executing nifty tricks on your skateboard. However, the absence of a second analogue stick on the PSP, usually used to control camera angles, results in you becoming disorientated at times, especially after you\'ve jumped off a wall or performed a reverse dive. Enemies who are really close to you are also hard to target. Also, gameplay may get repetitive after awhile. Nevertheless, the sheer fun of the various missions and multi-player games make CCC an addictive quickie on the PSP.