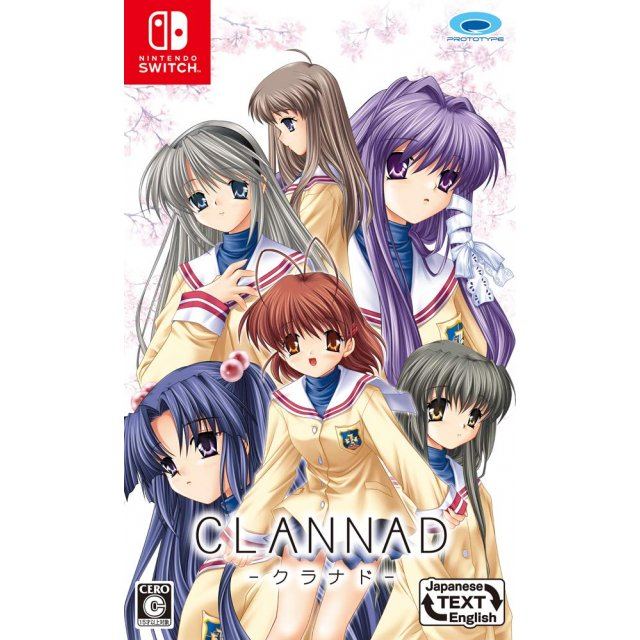 Okazaki Tomoya is a third-year high school student at Hikarizaka Private High School, leading a life full of resentment. His mother passed away in a car accident when he was young, leading his father, Naoyuki, to resort to alcohol and gambling to cope. This resulted in constant fights between the two until Naoyuki dislocated Tomoya’s shoulder. Unable to play on his basketball team, Tomoya began to distance himself from other people. Ever since he has had a distant relationship with his father, naturally becoming a delinquent over time.

While on a walk to school, Tomoya meets a strange girl named Furukawa Nagisa, questioning if she likes the school at all. He finds himself helping her, and as time goes by, Tomoya finds his life heading towards a new direction.

If you are familiar with Clannad (Multi-Language), why not let others know?

osilru1 (4) on 29, Jul. 2019 13:03 (HKT)
Great Visual Novel
It's a great visual novel for all ages. It's a slice of life story about a touble student meet a girl.
It has great soundtrack and voice acting. IT has an english text option.
[This review is based on another version of this product]
Lord Kite (110) on 07, Jul. 2018 15:52 (HKT)
good game!
The story of Clannad takes place in a Japanese school, where Okazaki Tomoya, a student whose mother had died while he was young and his father is sunk in the game and alcohol, meets Furukawa Nagisa, an enigmatic girl with not very ordinary qualities that It will change your way of thinking and seeing things. It will forge a friendship that will be strengthened throughout the series and that will bring sad and happy moments, why not, supernatural.


The strength of this series are its characters, not only because of its very characteristic personality, but also because of the evolution they suffer throughout the series and the mature nuance and personal growth that we can see on seeing the last episodes if we compare them with the first. The main characters are all girls except for the protagonist, Okazaki, but do not be fooled, this is not a romantic comedy-style series, but will forge a solid argument that will leave us wanting more.

Argumentally, simply impressive, yes, have at hand a package of tissues and chocolate ice cream, because although you will end up wanting more (there is a sequel, Clannad After Story), will leave you morally shattered, the alti-low between comedy and depressive moments worthy of classic tragicomedies are the strength of this series.
It is played without doubt with the ability of the viewer to become attached to characters and once identified with them make them suffer to pass on these feelings to the viewer.
[This review is based on another version of this product]
deekay (1) on 07, Jul. 2018 01:06 (HKT)
Clannad PS4 Japanese Release
I have played the Official release for PC but wanted a physical copy. I can confirm this plays perfectly well here in the UK on PS4 with English language and downloaded Patch 1.01 without problems.

This is a wonderful visual novel with stories on most of the routes that made a big impact on me. Great voice acting, characters; humour and tragedy abound and no need to worry if it makes you cry - it's normal! Note it is a very long VN taking around 100 hours to complete even following walkthroughs (which you may well need to make all the necessary choices, but "wrong" choices can be fun too.
[This review is based on another version of this product]
vio-deni (53) on 26, Aug. 2010 14:27 (HKT)
Clannad (The Best Edition)
One of the best visual novel that I played! Clannad is amazing! If you like vn genre with interesting stories or another romantic adventure games, yiu should buy it!
[This review is based on another version of this product]
aasyranth (5) on 24, Oct. 2009 01:18 (HKT)
A Huge Slice of Life
(This review is for the PS2 version "Best" edition) As the title indicates, Clannad is HUGE. This visual novel can easily consume 300 hours of your life. The 48 episode anime series based from this is a severely abridged version of the story, just to give you an idea. As for the visual novel, this version is full-voice for every line of dialogue spoken, including material from bit characters that are not even shown. There are thirteen endings, twelve of which must be completed to reach the conclusion to the entire story. There are NO dirty scenes in any version of Clannad, so you don't have to worry about such content being shoe-horned in like you see with so many visual novels. All-in-all, Clannad is fantastic, and you'll feel like you've lived through a different life once you've gone far enough into it. (NOTE: A proficient Japanese reading level is needed for this game, and a strong understanding of the spoken word will help immersion. There are fan-translation patches for the PC version, but no such option is available for the PS2 release)