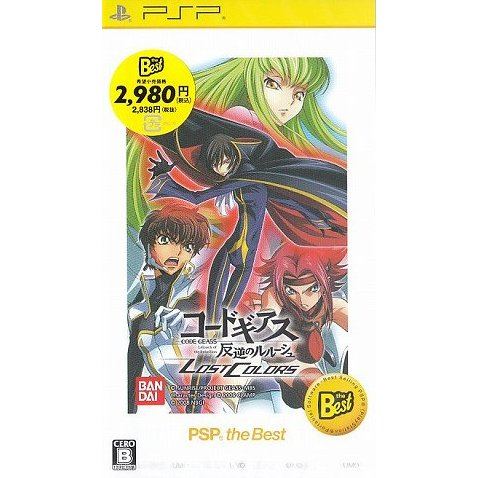 sold Out of print / Out of stock.
Manufacturer
Bandai Entertainment
Compatible With Sony PSP™ (PSP™)
Version

Code Geass: Hangyaku no Lelouch - Lost Colors is a “choose your own adventure” game. You descend into the world of Code Geass as yourself and decide on the course of your own destiny as well as those around you. The game unfolds in front of your eyes in a first person perspective. This is a perfect opportunity for those of you who are frustrated at how events turned out in the anime and are dying to turn circumstances around.

Your story starts after episode eight in the anime, after Lelouch formed The Order of the Black Knights. As an amnesiac youngster, you are lost amongst the students in Ashford Academy. After a near death experience in the swimming pool, you are rescued by the student president Millay Ashford. Your past is lost to you, but you have a future to grasp, talk to a large cast of characters around you to figure out your surroundings. These characters are fully voiced by the star studded cast of seiyuus in the anime. Aside from the characters from the first series, key characters like Rolo Lamperouge, in the second series appear as well, so watch out for the spoilers.

Unlike most games where you have to join either one side or the other, in this game, you are completely free to do as you please. Fight for your believes with Knightmare frames and befriend any of the characters, your fate is determined completely by yourself and not the gaming system. Depending on the choices you make in the game, you change the course of destiny for everyone e.g. characters escape certain death, alliances forms or breaks.

If you are familiar with Code Geass: Hangyaku no Lelouch - Lost Colors (PSP the Best), why not let others know?

patrick2733 (11) on 02, Feb. 2011 02:51 (HKT)
I am the fan of Code Geass. I like this game so much!
lyevioleteye (1) on 20, Jul. 2010 11:47 (HKT)
Speaking as a big fan of Code Geass, I found this game very fun; however, if you don't know the show, it may not appeal to you. Knowledge of Japanese is recommended, since the game is text-based and Japanese language only, although translations of most of the interactions can be found online. The voice acting is good. The scenes are usually pretty short and sometimes rather shallow; however, many are amusing or interesting. The game gives the player a lot of different choices, many of which directly impact the path of your storyline, so the player has a lot of control and there is a lot of room to see new material on multiple playthroughs. Heartily recommended for any fan of the show.
ewhu2001 (1) on 03, Mar. 2010 14:31 (HKT)
No title
Loading time was a bit annoying, and OC's geass/story could've been more original. Endings and graphics were good.