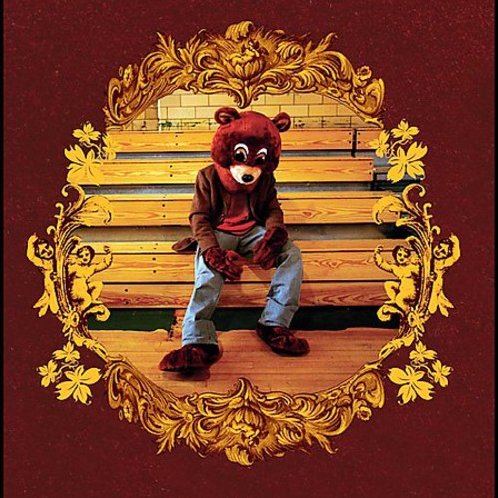 sold Out of print / Out of stock.
Please take note that, once purchased, this item must be paid immediately and cannot be cancelled or returned.
Manufacturer
Def Jam
Feature
Kanye West
Version

Producer Kanye West's highlight reels were stacking up exponentially when his solo debut for Roc-a-Fella was released, after numerous delays and a handful of suspense-building underground mixes. The week The College Dropout came out, three singles featuring his handiwork were in the Top 20, including his own "Through the Wire." A daring way to introduce himself to the masses as an MC, the enterprising West recorded the song during his recovery from a car wreck that nearly took his life while his jaw was wired shut. Heartbreaking and hysterical ("There's been an accident like Geico/They thought I was burnt up like Pepsi did Michael"), and wrapped around the helium chirp of the pitched-up chorus from Chaka Khan's "Through the Fire," the song and accompanying video couldn't have forged his dual status as underdog and champion any better. All of this momentum keeps rolling through The College Dropout, an album that's nearly as phenomenal as the boastful West has led everyone to believe. From a production standpoint, nothing here tops recent conquests like Alicia Keys' "You Don't Know My Name" or Talib Kweli's "Get By," but he's consistently potent and tempers his familiar characteristics high-pitched soul samples, gospel elements by tweaking them and not using them as a crutch. Even though those with their ears to the street knew West could excel as an MC, he has used this album as an opportunity to prove his less-known skills to a wider audience. One of the most poignant moments is on "All Falls Down," where the self-effacing West examines self-consciousness in the context of his community: "Rollies and Pashas done drive me crazy/I can't even pronounce nothing, yo pass the Versacey/Then I spent 400 bucks on this just to be like 'N*gga you ain't up on this'." If the notion that the album runs much deeper than the singles isn't enough, there's something of a surprising bonus: rather puzzlingly, a slightly adjusted mix of "Slow Jamz" a side-splitting ode to legends of baby-making soul that originally appeared on Twista's Kamikaze, just before that MC received his own Roc-a-Fella chain also appears. Prior to this album, we were more than aware that West's stature as a producer was undeniable; now we know that he's also a remarkably versatile lyricist and a valuable MC.

No reviews for College Drop Out yet.