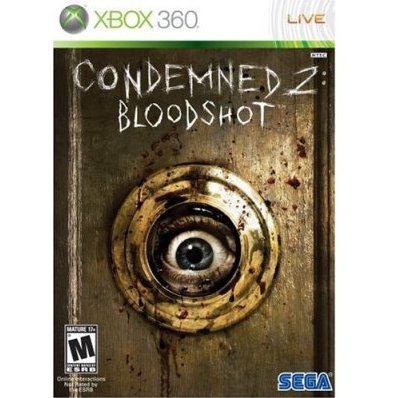 Works on all systems sold worldwide, a correct regional account may be required for online features.
1w Expected stock arrival within 1 week.
US$35.99
Manufacturer
Sega
Rated By Our Customers
Compatible With Xbox360™ (X360)
Version

Works on all systems sold worldwide, a correct regional account may be required for online features.
1w Expected stock arrival within 1 week
Price
US$35.99
Play-Asia.com Return & Refund Policy
Click on a thumbnail to see more pictures for Condemned 2: Bloodshot

Condemned 2: Bloodshot™ ratchets up the bone-crushing brutality of the popular psychological thriller with an all-new fighting system and for the first time, online multiplayer modes. As Ethan Thomas, the unstable and disgraced Serial Crimes Unit investigator, you will face horrifying enemies and endless heart-stopping surprises in the shadows of a strange and sinister world. Utilize a new set of high-tech forensic tools and fight off violent enemies on the perilous hunt for your missing partner. You'll need to use anything and everything in the environment to survive as you unravels the mysteries shrouding the city in darkness. Condemned 2: Bloodshot is set to horrify the masses in 2008.

If you are familiar with Condemned 2: Bloodshot, why not let others know?

quake_ranger73 (143) on 27, Apr. 2014 23:47 (HKT)
Give Bloodshot a shot!!
After played the first game, I can't get enough. Bloodshot is still fun and full of suspense with new power-ups. The co-op is a so much welcomed. Must haves for all the fans
[This review is based on another version of this product]
nottttttt (48) on 06, Feb. 2013 11:09 (HKT)
Interesting!
Great
[This review is based on another version of this product]
royalgok (5) on 17, Nov. 2012 21:06 (HKT)
Gory and satisfying
Bought this quite a while back, but it's one of my favourites. The ambience is really dark and quite unnerving at times, and the storytelling is as weird as reported elsewhere. Spotted a few washed out textures but the gameplay more than makes up for any such complaint. If you liked the early F.E.A.R. games you're sure to like this.
[This review is based on another version of this product]
lanceuli (3) on 26, Aug. 2011 12:04 (HKT)
Vastly Underrated and unappreciated franchise
The Condemned Series has always been overshadowed by its older sibling series (F.E.A.R) this is not to say that the FEAR series is superior to the Condemned franchise, far from it, in this reviewer's opinion.

The Condemned Series is well known by its niche fan base for its dark and gritty environments and foreboding ambiance. Condemned has brought new life to the otherwise under utilized game mechanic most FPS games have; which is the Melee attack system. The game has managed to make improvements and vast developments to its predecessor's melee combat system with the addition of using Ex-Agent Ethan Thomas' bare fists which are mapped to the shoulder buttons of the controller.

Having played the first game, which had many surprises and shocking situations and set pieces, bloodshot has managed to live up to its predecessor in both gameplay department as well as having a lot more surprises and general creepyness in its level design.

Environments and level designs are very atmospheric and memorable

Polarized difficulty spikes from easy to incredibly hard in some levels