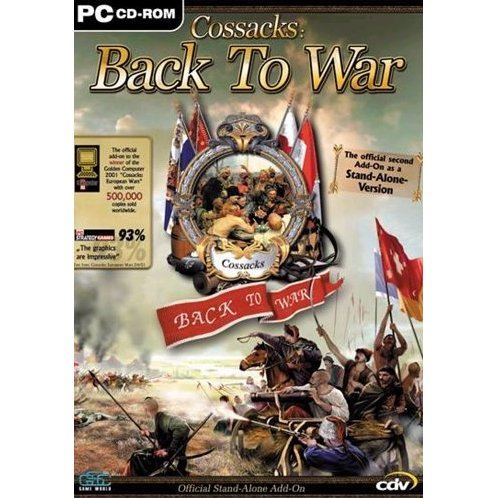 Cossacks: Back To War

sold Out of print / Out of stock.
Manufacturer
CDV
Compatible With Windows™ (PC)
Version

Cossacks is a real-time strategy game that allows players to command vast armies, up to 8,000 units per map, in authentic historical warfare, set between the 16th and 18th centuries.Featuring over 100 new single-player missions, Cossacks: Back to War offers over two and a half as many levels as its previous iteration. It also introduces two new nations into the battle, Switzerland and Hungary, offering established players totally new strategic choices. There is also a random terrain generator that offers almost infinite replayability, whilst the sophisticated map editor allows players to easily design campaigns to spec. As a bonus, "Mod1", created by one of the game's most ardent fans, is included, offering a further 30 playable maps, with a unique set of units.For fans of multi-player gaming, Back to War introduces a new VIZOR system, which allows players to watch multi-player games in progress, picking up addition tips from real-life competitors. An Automated Championship System (ACS) promotes individual Cossacks tournaments as well as hosting a worldwide ranking system, which will list the best players in the world.Cossacks: Back to War will work with the original Cossacks game or as a stand-alone title.

No reviews for Cossacks: Back To War yet.