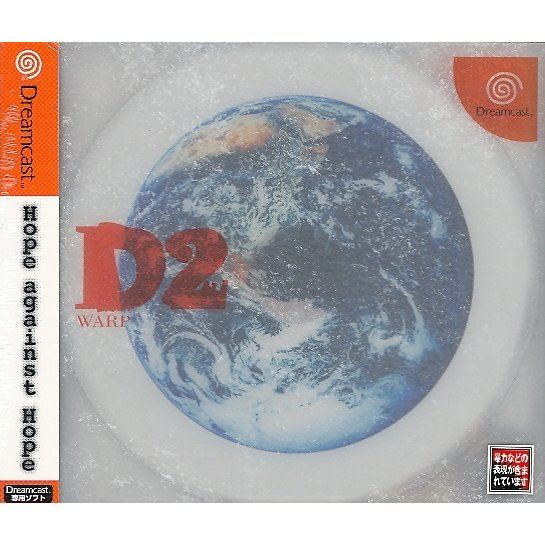 Warp
Compatible with Dreamcast™ (DC™)
For JPN/Asian systems only.

D2 marks Warp's first foray into sequel territory -- and their first attempt at a purely real-time game outside of the obscure 3DO game, Trip'd. D2 is not a direct sequel to the first game (D) in the series, but it does share many of its idiosyncratic elements. First off, and most recognizably, the game stars the blonde "digital actress," Laura, heroine of previous Warp adventures. Kenji Eno, Warp's rotund ringmaster, has stated that D2's main theme is "snow." You'll be seeing an awful lot of it as you traverse the wilds of Canada, hunting animals for sustenance, and taking part in what could only be called a "Survival Horror/RPG." While you do engage in random scuffles with nasty monsters, the combat system is much more action-oriented, with Laura popping and reloading her Uzi from a first-person perspective. Sega's censors frowned at the game, and some of its more questionable moments have been cut for the U.S. release. That means American gamers can't take pleasure in some of the decidedly nasty things that happen to the game's characters, mostly involving extremely naughty tentacles.

No reviews for D no Shokutaku 2: Hope yet.