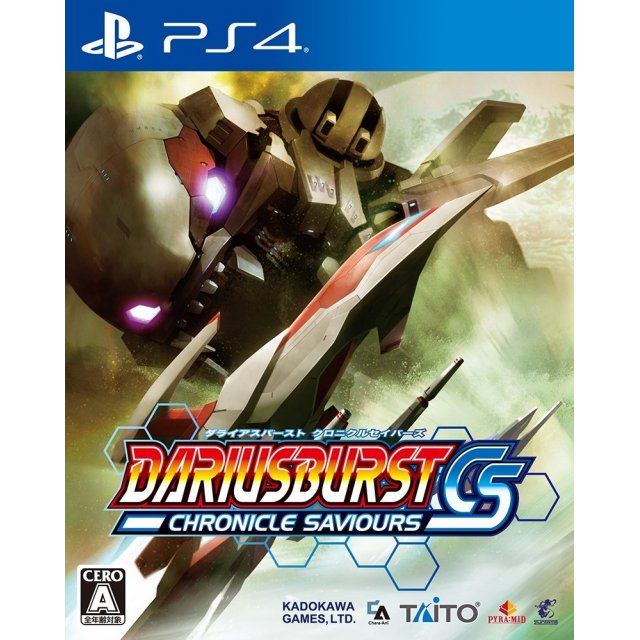 Works on all systems sold worldwide, a correct regional account may be required for online features.
24h In stock, usually ships within 24hrs. (Only 1 left in stock.)
US$103.99
Manufacturer
Kadokawa Games
Compatible With PlayStation 4™ (PS4™)
Version

Works on all systems sold worldwide, a correct regional account may be required for online features.
24h In stock, usually ships within 24hrs
(Only 1 left in stock.)
Price
US$103.99
Play-Asia.com Return & Refund Policy
Click on a thumbnail to see more pictures for Dariusburst Chronicle Saviours

Chara-Ani and Pyramid have announced that space/aquatic-themed side-scrolling horizontal shooterDarius Burst: Chronicle Saviourswill be releasing digitally for both PlayStation 4 & PC, and most excitingly for collectors: releasing physically for the PS Vita, now available to pre-order!

The latest Chronicle Saviors release will be a complete port of the 2011 arcade cabinet game title Darius Burst: Another Chronicle EX(which was itself an enhanced version of the 2010 release), while also offering new modes, new bosses, and new background music for players to experience.

Dariusburst Chronicle Saviours will feature Original Mode, Chronicle Mode (3000 stages), Original EX Mode, Event Mode, & CS Mode (200 stages). The game will also include (4 person) multiplayer, but this feature is currently only confirmed for the PlayStation 4 version. PS Vita will include all single-player.

If you are familiar with Dariusburst Chronicle Saviours, why not let others know?

badneoaldo (8) on 02, Mar. 2018 01:30 (HKT)
A good shooter
Classic, great music and a great challenge for those who love shoot'em up
piry311 (61) on 11, Aug. 2017 08:23 (HKT)
Great shmup
The days of Darius were amazing while I was growing up, now this addition is a love song for the series. I completely liked the game. Recommended
[This review is based on another version of this product]
docomogame (540) on 23, Apr. 2017 22:57 (HKT)
Good game
Hard to find shump game on system
sonicsju (1) on 20, Apr. 2017 09:26 (HKT)
Finest shooter on PS4
My first JP import for my current alpha of consoles (PS4) shouldn't be of no surprise that it's from a respected franchise like the Darius series, after all my very first import game was for my all time favorite console (Sega Genesis) and it was Darius II.
Although Limited Run Games will release this in the states, it will be a VERY LIMITED quantity and very likely sell out before my browser updates. So instead I took a plunge with Play-Asia and I couldn't be happier. This shooter is amazing with so many options, gameplay, paths and ships to select! The soundtrack by Zuntata still rocks the synth! The Darius odyssey is a welcoming factor of the history of the series and shows how far the silver hawks and the belga armadas have gone through the years.
If you love shumups like me, don't hesitate. BUY THIS GAME!!!