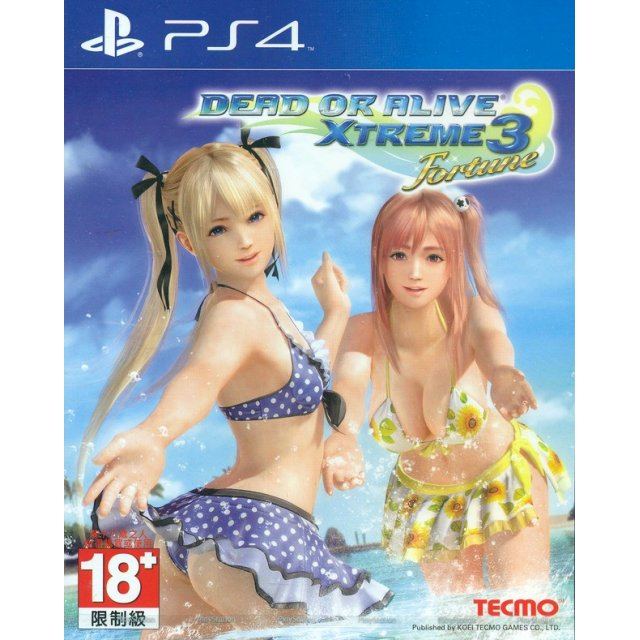 Exceeded my expectations
Several American reviewers attempted to sabotage this game even though it wasn't being released outside of Asia/Japan. Those reviewers should be absolutely ashamed of themselves!

Yes, this game is about beautiful women that you can dress up in different swimsuits and take suggestive pictures of....so what? I think ...[read more...]

By using the upgraded Soft Engine 2.0 for thePS4 Version (an improved breast engine based off Dead Or Alive 5 Last Round)and the Soft Engine Lite (PS Vita Version), 4 main changes have been made to the character models. New skin shaders give off a realistic andhealthy vibrancy, and breast physics have been fine tuned for maximum voluptuousness. As well,game changing booty physics have been fleshed out, along with the fact that no other game containssuch realistic tanning. The main stay Camera Mode also returns and will be compatible with the upcoming PlayStation VR.

Finally, Dead Or Alive Xtreme 3 isa Japanese/Asian Region exclusive, although if a Western release happens, according to Koei Tecmo, it will be an "adjusted" version. What this actually means though, is highly based on the assumption of censorship; in the meantime, this version is the only sure bet on the original xtreme experience.

If you are familiar with Dead or Alive Xtreme 3 Fortune (Multi-Language), why not let others know?

joeycross (5) on 30, May. 2019 06:49 (HKT)
Top!
If you expect much gameplay than this game is not for you. but if you like the dead or alive characters and want to go on a holiday with the girls (loooots of fanservice included) Definitly get it! its worth it!
msm197311 (33) on 31, Aug. 2018 19:05 (HKT)
Relax and enjoy and a must buy
With every buck I spent, it's relaxing, fun, captivating and the girls are really beautiful. Don't expect a Nier level of story, like said before it's a game to enjoy and relax and have fun with it. Besides that, if you are against censorship and all the puritan agenda they are pushing on us (yes, sexuality is not evil, there are real worth things to fight, get your priorities right!!) it's a must buy and a sign to the Devs to keep making this games, that there is a market for it.
gmhardwar (1) on 25, Aug. 2018 00:01 (HKT)
Delivers what it promises.
Pure Fan service. Girls, Beach, Fun. Look at it as a welcome break from your routine. Relax and enjoy.
msm197311 (33) on 05, Aug. 2018 15:29 (HKT)
Fan service on max level
Ok, I don't think if you are interested in this game that you expect a deep and philosophical gameplay. It's enjoying the lady's on the beach, playing mini games and taking pictures of them. Play some roulette poker or black Jack to earn some money and buy gifts.
I for my part love it, you can relax and simply enjoy the music and the graphics (really great graphics btw) and have a good time before you go back to your everyday game.
The bad are the microtransactions, but you can enjoy the game perfectly without it.
I recommend it if you like DOA or enjoy Fanservice, then it's 100% for you
dante_destroyer (1) on 12, Jul. 2018 08:18 (HKT)
It's DOAX3, what more can you expect?
It's a bit annoying that it doesn't have some of the more iconic characters in it, but it's still exactly what you expect.
1 »