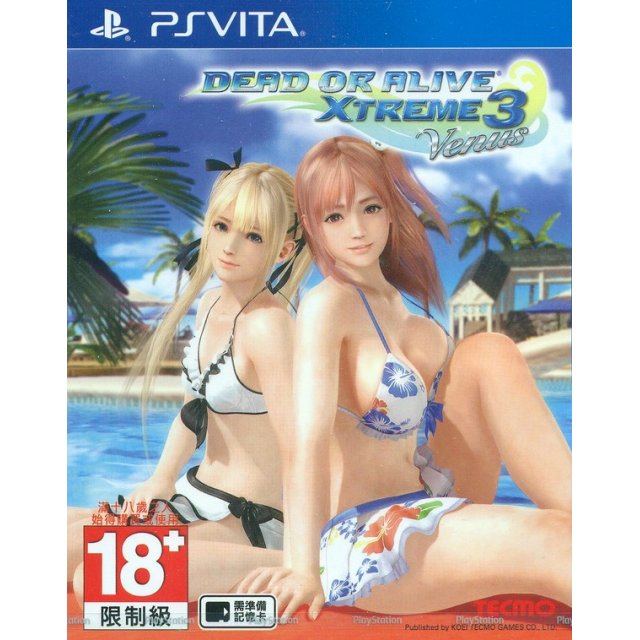 sold Out of print / Out of stock.
Manufacturer
Koei Tecmo Games
Rated By Our Customers
Compatible With PlayStation Vita (PS Vita)
Version

By using the upgraded Soft Engine 2.0 for thePS4 Version (an improved breast engine based off Dead Or Alive 5 Last Round)and the Soft Engine Lite (PS Vita Version), 4 main changes have been made to the character models. New skin shaders give off a realistic andhealthy vibrancy, and breast physics have been fine tuned for maximum voluptuousness. As well,game changing booty physics have been fleshed out, along with the fact that no other game containssuch realistic tanning. The main stay Camera Mode also returns.

Finally, Dead Or Alive Xtreme 3 isa Japanese/Asian Region exclusive, although if a Western release happens,it will be an "adjusted" version. What this actually means though, is highly based on the assumption of censorship; in the meantime, this version is the only sure bet on the original xtreme experience.

If you are familiar with Dead or Alive Xtreme 3 Venus (Multi-Language), why not let others know?

[This review is based on another version of this product]
joseluis.av (1) on 14, Jan. 2020 09:07 (HKT)
A game worth the price
It is an indispensable video game for those ecchi and Dead or Alice fans. It is quite simple but, although it does not have major complications, it is not so intuitive to play it if you do not understand the language. In this respect, this game is only in Japanese, it has no other language available. So if you don't understand Japanese, you better buy the Asian version that includes the English language.
jaywhywhy (7) on 16, Sep. 2018 03:26 (HKT)
perfectly resonable
Visually impressive with solid mechanics.
ordosx1 (2) on 24, Aug. 2018 17:41 (HKT)
Mejor en vita que en PS4
Vale, los gráficos son algo peores y no hay el increible efecto mojado / bronceado de sol que tiene la ps4, pero el juego es tan simple y destinado a "fan service" que lo hace ideal para llevar y me encaja mucho más en la vita que en la ps4.

No es perfecto, pero es una compra recomendada. :)
Max_Laguna (29) on 27, Jul. 2017 09:29 (HKT)
I love this game
Excellent graphics for PS Vita and PS TV.
shyman72 (11) on 21, May. 2017 06:08 (HKT)
Xtreme 3 loveliness on the go!!
This is a great title for DOA fans and new-comers alike. While it is playable the PSTV (Vita TV), it seems to shine better on the PS Vita. The gameplay from the PS4 version is included in this one (Volleyball, Pool-hopping, Rock climbing, Beach flags, Tug-of War, Butt-Battle and more). But in comparison to its PS4 counterpart (DOA Xtreme 3: Fortune), there are a few differences. This game unlocks its exclusive Venus swimsuit that can be brought over to the PS4 version. There are also touchscreen options that unlock once the player reaches Owner level 60 and a "Tilt-Sensing" Golden Camera at Owner level 5. Items are unlocked using the "Link-Data" feature in the Options menu. The feel of the controls are good but may take a little time to get comfortable with if you have been playing the PS4 version. It also seems odd that this version does not have the "Tan or Tan-Lines" feature for the girls skin as it does on PS4 but that does not ruin the game. Many may only get this for unlocking the Venus for their PS4 version but I feel DOA Xtreme 3: Venus is still worth having. DOA Paradise was great on PSP for its time, but this game is a must have for any DOA Xtreme fan who owns a Vita.
1 »