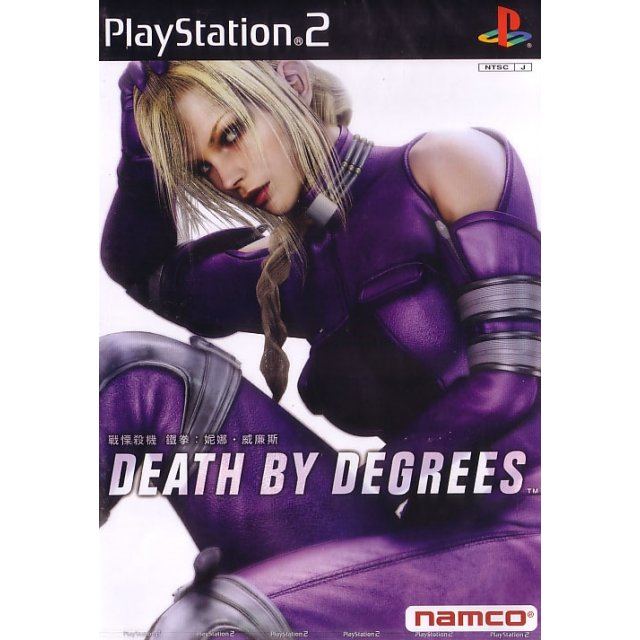 Tekken's assassin, Nina Williams, infiltrates a dangerous underground world as a voluptuous undercover operative. When Nina investigates a hi-tech weapon in the hands of a shadowy organization, she uncovers a world of nonstop danger and betrayal. As Nina, you must use either aggressive or stealthy tactics to pass your enemies. Combine signature moves from Tekken with firearms and melee weapon attacks. Uncover and thwart the plans of an international terrorist organization as you execute your mission; and your enemies.

If you are familiar with Death by Degrees Tekken: Nina Williams (Chinese Version), why not let others know?

I played it for the first time and I felt it was really cool. Nina never failed to turn heads. It was fun jumping up and defeating terrorists and stuff. The graphics are....well, not very great, but the CGI cutscenes were cool. I enjoyed playing. I truly did. 1 con of the game-- the sound. It's the same tracks over and over again. And the worst part is you don't stay in a room for 5 minutes for the song to change so it's basically 1 song, because everytime you enter another room the track starts over...

The manual is in english and the game has english voices so anyone can play this game!
Hop (5) on 16, Mar. 2006 09:21 (HKT)
worth it for the Nina fans
I bought this even though I already have the U.S. version because I\'m a big Nina fan, been using her since Tekken 3. A lot of people claimed that this game really sucks that it\'s not even worth the money, that\'s so untrue. It\'s a pretty fun game, the only flaws of the are the camera angels and somewhat clumsy movements. But $6.90 for this, that\'s way too better than a great deal, only at Play Asia.
manta-evo (46) on 15, Jun. 2005 04:36 (HKT)
GO NINA GO ;-)
It\'s a cool action-game but the graphics not the greatest. This is easy to play for all non-japanese/chinese readers because the manual is english too and the persons speak english - that\'s nice!!
FOR THIS CHEAP PRICE A GOOD DEAL !!!