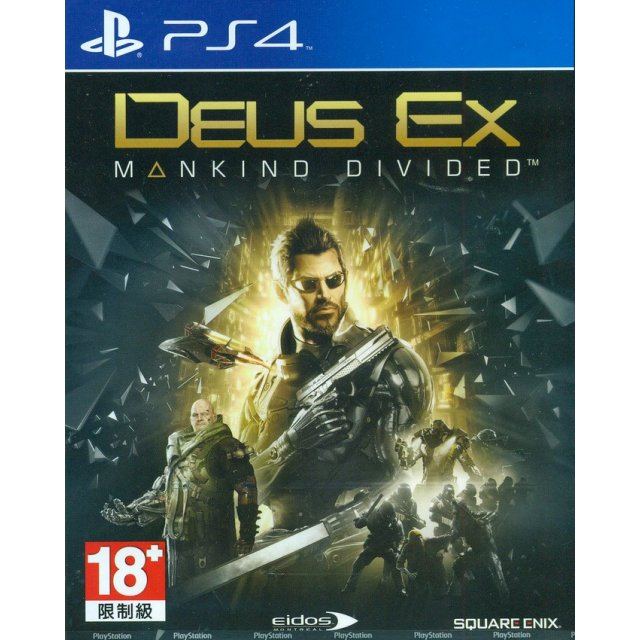 sold Out of print / Out of stock.
Manufacturer
Square Enix
Compatible With PlayStation 4™ (PS4™)
Version

" Deus Ex: Mankind Divided directly follows the aftermath of the Aug Incident, a day when mechanically augmented citizens all over the world were stripped of control over their minds and bodies, resulting in the deaths of millions of innocents. The year is now 2029, and the golden era of augmentations is over. Mechanically augmented humans have been deemed outcasts and segregated from the rest of society. Crime and acts of terror serve as a thin veil to cover up an overarching conspiracy aimed at controlling the future of mankind… "

Set two years after the events of Deus Ex: Human Revolution, Adam Jensen has a new purpose in life; reacting to the bittersweet revelation from the Aug Incident from Human Revolution, he is now part of Interpol's Task Force 29as the only augmented human on the team. Empowered with the most advanced technology possible for the sole purpose of taking down terrorism, which path will Jensen take - especially when one man's terrorist is another man's freedom fighter?

When it's time to face foes head on or disappear in the shadows, this combination seen from the previous title creates an intuitive take on balancing stealth and action, and it is all up to the player, as each field often mulitple solutions, but only for the keen and observant.

While the previous game was criticially and player acclaimed, one major criticism was the nature of the superimposed boss fights, forcing players into combat breaking the idea of choice given throughout the game. In Mankind Divided, it has been confirmed that Jensen can now even sneak through boss encounters, allowing for a pure 100% stealth run; there is also the return of the fan favorite conversation boss fight, alluding to negotiation and finesse as opposed to resolution from the barrel of a gun.

Of course, those who choose action are entirely able to veer in this direction, especially with rumored new augmentations which will recieve new details when the game nears it's launch date. In the meantime, Gamers can only hope that the next Deus Ex can bring back that epic feeling of sci-fi scope, and that their actions, however minute, may make a difference in the world run by a multitude of factions who do not have everyone's fate as their best interest -that and giving an unsuspecting foe a throwdown from behind a brickwall...

If you are familiar with Deus Ex: Mankind Divided (English), why not let others know?

Like all deus-ex games you have total freedom on how to take on missions be it via stealthy takedowns, sneaking or even going in loud with guns blazing. Personally I prefer stealth takedowns on my 1st playthroughs. And 2nd playthrough I usually use sneaking leaving all enemies un-disturbed but it is very challenging requiring extreme patience since all enemies remain on station so one wrong move will mean you get detected but it is quite exhilirating.
[This review is based on another version of this product]
Imation (464) on 16, Feb. 2017 02:07 (HKT)
a great idea
fantastic rpg style with a style unique of gameplay, is very playable
[This review is based on another version of this product]
postal (42) on 01, Nov. 2016 00:45 (HKT)
Great RPG!
Thank you for letting me purchase this game!