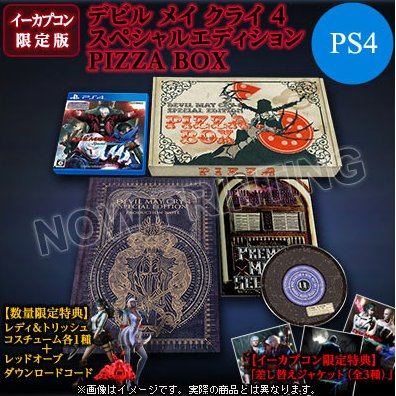 sold Out of print / Out of stock.
Please take note that, once purchased, this item must be paid immediately and cannot be cancelled or returned.
Manufacturer
Capcom
Compatible With PlayStation 4™ (PS4™)
Version

For the uninitiated, the original Devil May Cry series brought forward the idea of playing with SSStyle; with breakneck speeds, intricate and acrobatic combos, perfect controls, and an intense presentation filled with the Capcom-esque grit reflecting the trends of the time, Devil May Cry is a direct influence to many of today's similar titles.

Seven years after the original launch, Capcom is bringing back Devil May Cry 4 - the publisher's first PS3 title with Devil May Cry 4: Special Edition. On the PS4 and Xbox ONE, with a treatment similar to their recent revival with Resident Evil: HD Remaster, DMC4: SE will have new game modes, gameplay and visual improvements, and perhaps the most exciting aspect for fans, the largest playable roster in any DMC game yet!

Speaking of the roster, fan favorite Vergil is playable, with his appearance based on his rendition from Devil May Cry 3: Dante's Awakening Special Edition. Gameplay wise, a new mechanic is introduced known as "Concentration", which complements Vergil's iajutsu style rewarding players with progressively stronger attacks when fights are executed calmly without the dependency of button mashing. This combined with the "Grim Trick" teleport ability, will not only challenge veterans and newcomers alike, but offer a distinct experience separating Vergil from both DMC mains Dante and Nero.

While Trish is a returning playable character, her biggest change is the removable of her previous style of weapon switching, and now instead uses the Sparda sword in a multitude of ways without complex button combinations; although this may sound simple, it is far more difficult to excel with simplicity, and this new play style will be something to look forward to.

Finally, expect to see a veritable wardrobe of new costumes for each character, compatible with in-game cut scenes as usual with Capcom titles, just for that added visual freshness!

Look forward to one of most exciting series of our time, with Devil May Cry 4: Special Edition - releasing this SSSummer!

If you are familiar with Devil May Cry 4 Special Edition [e-capcom Limited Edition], why not let others know?

1. I didn't care for the packaging layout: I would've preferred having the game and changeable cover in the main packaging

2. My main gripe with this "special" edition is the addition of carbon copy character models, namely Lady and Trish. I would say the same for Vergil, but honestly I enjoyed him too much, but also his character model for the most part had enough uniqueness to stand separate from Dante and from Devil May Cry 3 we have an establish-able reference to say the character isn't a total carbon copy of Dante. Trish and Lady on the other hand were just Frankensteins monster duplicates of Dante. Lady's defining quality: a guns expert aka gunslinger. Her play style is far too slow for her to be an effective character and against bosses, especially on higher difficulties, her damage output is far to little to be a manageable character. Trish on the other hand, while yes as a character model she isn't as nerfed as Lady in terms of damage output, her defining mechanic is her electric dance and electric devil trigger. Her sparada mechanic is derivative of Nero's devil bringer and Lady's grappling blade, while her hand based combat mechanic is gilgameshless/beowulfless rip. But I will say Trish is more enjoyable than Lady, however that isn't saying much when you consider the fact that you must play through as Lady first. I hated this aspect with Nero/Dante as well, however, that was the set by the initial design of Devil May Cry 4 and as such had in game context for such a choice. Lady and Trish however have no such context, if anything we have context to the fact we should have been playing as Trish by herself based on the plot of the game. Also there is no reason that Capcom couldn't have built in a grappling mechanic for Trish based on her electric abilities and sparada mechanic. Let it be noted Trish is a electricity based demon, my issue, why is she unable to attack blitz head on; don't know if this is oversight from Capcom developers or conscious move, but regardless it's a stupid move.

I understand Capcom has to give just "enough" for it to become a "special" edition, however, considering that out of the three "newly" introduced characters, 2 of them just focalize a particular aspect of Dante/Nero's character models, you honestly are getting less and what essentially amounts to skins (not to mention the pathetic intro of DLC into the Devil May Cry series) for the former characters. Also considering this "special" edition came out almost 7 years since the original, and assuming this special edition had been planned shortly afterwards, this would most defiantly be considered a cash grab for the amount and quality of the content put in. If on the other hand this was created for the sole reason of rebounding from DmC in some form or another, then this again exist as a cash grab to recoup losses. The only positive I guess that came out of this is Capcom "learned" (honestly they would have to be openly blind or ignorant of fans) fans still care about the Devil May Cry series.

To me a special edition would have been, keep the new CG video clips and Vergil as is, but remove Trish and Lady entirely and instead add new or boost old mechanics for Nero. Begin able to play as Vergil from the get go immediately disregards the prospect of playing as Nero, essentially it made him as weak as playing as Lady's character model. I would argue Vergil removed the replayability of DMC4se, in that you're more likely to stick with Vergil, or you risk having to trudge through a boring and annoying play through with Nero/Lady just to get to Dante/Trish. Dante is perfectly fine as is.