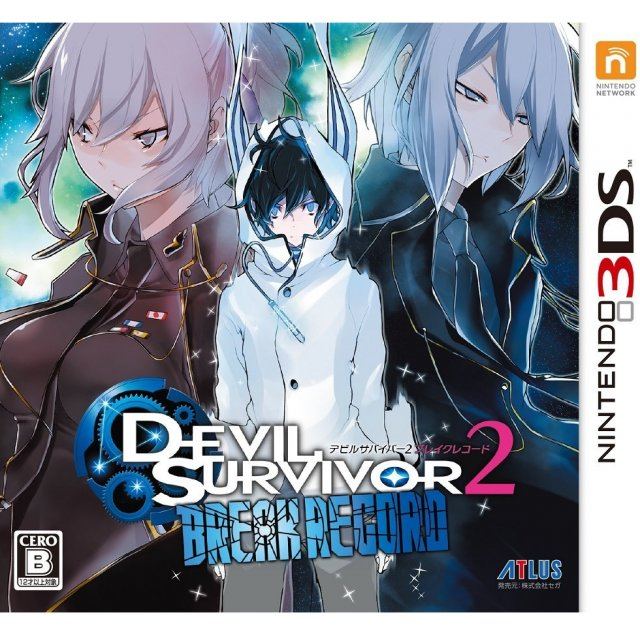 Atlus
Compatible with Nintendo 3DS™ (3DS)
For JPN/Asian systems only.

sold Out of print / Out of stock.
Manufacturer
Atlus
Compatible With Nintendo 3DS™ (3DS)
Version

While receiving positive reception from Gamers and critics alike, the original Devil Survivor 2 for the Nintendo DS alienated some with it's high level of difficulty and lack of innovation in the tactical RPG genre. With Devil Survivor 2: Break Record, Atlus has enhanced the title, with extra features including voice acting for most if not all dialogue, a new female character,and an extra scenario which can be considered as a standalone RPG in itself!

Set within astory of a group of Japanese high school students who enter a pact whichenablethem to summon demons, common to the Shin Megami Series, this group mustfight mysterious creatures and prevent the destruction ofJapan.

Gameplay revolves around a 3v3 battle phase, and battle is presented asfirst person traditional turn based; players will be controlling one character and 2 summoned demons. Just like Persona, the "Extra Turn" mechanic is a huge factor in success, as being able to chain up attacks by exploiting the weaknesses of enemies becomes a huge strategy. As well, players can steal enemies skills.

Outside of battle,the storyunfolds differently depending on the player's actions and interactions with other characters throughout the game as they explore the country, with the result being multiple branching endings. Your interactions with the other demon users will create closebonds with themallowing you to befriend characters as well asexperience conflict between them;this is called the "Fate System."

With the new content, is the game is split into two scenarios, both accessible from the beginning. The first one is the "Septentrione Arc" which us the scenario from the original title; the "Triangulum Arc" continues immediately and cumulates the experience with brand new cut scenes and even characters!

Three Durarara!! characters from the light novelDurarara!!are available as party members by downloading through the internet connection added in game. Illustrated by same character designerSuzuhito YasudaofDevil Survivorseries,the characters and their time limits are:

No reviews for Devil Survivor 2 Break Record yet.