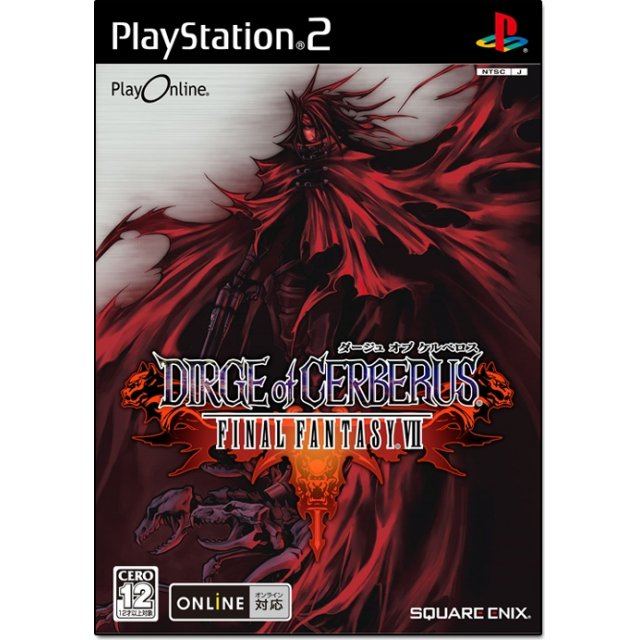 NTSC
24h In stock, usually ships within 24hrs. (Only 1 left in stock.)
US$35.99
Limited time offer - Secure yours now before the offer expires!

Manufacturer
Square Enix
Rated By Our Customers
24h In stock, usually ships within 24hrs
(Only 1 left in stock.)
Price
US$35.99
Our previous price:
US$ 38.99
You save:
US$ 3.00( 8% )
Play-Asia.com Return & Refund Policy
Click on a thumbnail to see more pictures for Dirge of Cerberus: Final Fantasy VII

DIRGE of CERBERUS™ traces the story of the mysterious Vincent Valentine in the first action game based on FINAL FANTASY® VII. In this character-driven action shooter, players will be able to customize their firearms, dispense strategic melee attacks, and use a limit break technique to transform into a powerful beast with special skills. The story of FINAL FANTASY VII continues to unfold three years after the events of the seminal 1997 title.Three years have passed since the events of FINAL FANTASY VII. Buried alive following Meteorfall, a mysterious group known as “Deepground” emerges and begins raiding the city of Midgar, ultimately threatening the world. The enigmatic Vincent Valentine is somehow connected to these attacks, and he may be the only one who can save this shattered society. When the world becomes shrouded in darkness, his gun will toll a dreadful dirge. Vincent is not alone in his journey; with the help of familiar friends, an amazing story unfolds as secrets are revealed and mysteries are explained.

If you are familiar with Dirge of Cerberus: Final Fantasy VII, why not let others know?

andre_shimizu (43) on 24, Mar. 2010 09:51 (HKT)
Excellent for FF VII fans
Don't take me wrong - Dirge of Cerberus is a decent action game, and it has its problems like any other action game. Great-looking graphics are a very good reason for playing it. But you can only fully enjoy it if you're familiar with the FFV II universe, which is not my case - I never finished FF VII, I like FF VI a lot more. Still, a very good game.
mandeepsingh100 (26) on 18, Dec. 2006 03:43 (HKT)
game is ok for CG cutscenes
game has amazing cutscenes just like the advent children movie if not even better with loads of action in them but its where the gameplay is concerned the game fails badly. aiming is completly wrong and in game graphics are mostly bland and the game is very linear. but it is good considering the cheap price on offer here, also game is relatively import friendly as the game is so linear but you wont understand the story if you dont know japanese but the english dub will probably be lame anyway so if you really want it stick with this version
wolfpack44 (36) on 11, Oct. 2006 06:59 (HKT)
Very Cool
I already knew what to expect from this game after reading the reviews and seeing the screenshots.

This just came out here not long ago and although SE has put in the online maps from the jp version to play as kinda side missions for the US version, this is all they really gave the US version with some better controls, nothing majorly new.

This price is outstanding and of course the jp cover art blows away the cheap looking cgi NA cover.

A fun shooter and nice to see FF7 locations and cut scenes done to a fairly modern standard.

Anonymous on 02, Aug. 2006 13:50 (HKT)
Not so great.
The game gets repetative and boring pretty fast. As much as I love Vincent, his pretty face isn\'t going to make the game fun. That was Squarenix\'s job.

The only reason I actually played thru the whole game was to see the FMVs. They were fantastic. But the gameplay wasn\'t. I wish they would have just made a movie so I could have watched it instead of having to force myself to play thru a subpar game.
Anonymous on 01, Aug. 2006 00:03 (HKT)
kick ass game
a really cool game tough it has some glitches
1 »