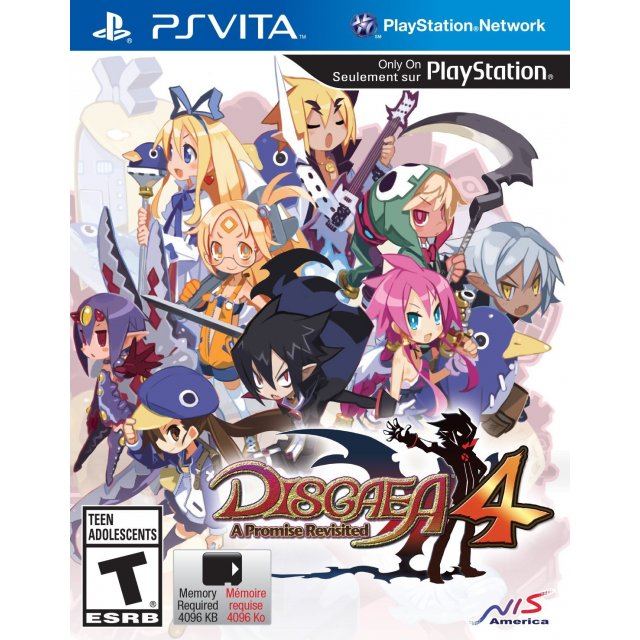 Works on all systems sold worldwide, a correct regional account may be required for online features.
1w Expected stock arrival within 1 week.
US$39.99
Our previous price:US$ 42.99
You save: US$ 3.00( 7% )
Manufacturer
NIS America
Rated By Our Customers
Compatible With PlayStation Vita (PS Vita)
Version

Works on all systems sold worldwide, a correct regional account may be required for online features.
1w Expected stock arrival within 1 week
Price
US$39.99
Our previous price:
US$ 42.99
You save:
US$ 3.00( 7% )
Play-Asia.com Return & Refund Policy
Click on a thumbnail to see more pictures for Disgaea 4: A Promise Revisited

Evil’s Plan for Greater Good:
Take the role of Valvatorez, a once powerful and feared Demon Vampire, as he plots to overthrow the Government of Hades. Makai Senki Disgaea 4 Return aka Disgaea 4: A Promise Unforgotten is the fourth flagship title of the Disgaea series, a hardcore turn-based strategy RPG for PlayStation 3.

The Promise and His Resolve:
Valvatorez become a Prinny instructor and leaves his dark past after a promise to a woman not to drink human blood. In the world of Disgaea, Prinnies are reincarnated from dead human souls, and their instructor plans to take them to take down the Government after President Hades orders total annihilation of their kind. Invade the world of Netherland; put a stop to the corruption of the government, and save all the Prinnies!

Techniques to Conquer and Succeed:
Disgaea 4: A Promise Unforgotten is loaded with remarkable techniques: “Evilities”, “Demon Fused”, and “Discipline”. Evilities are applied for every character in the game, and it’s used for combat where every character in the game can be picked up to become an ally or thrown if it’s an enemy. Players can use allies who have been picked up for “Team Attacks” or order them to acquire items. Demon Fused is an ability that merges two different monsters to form a gigantic type of a monster and Discipline is used for every captured enemy, to make them perform actions like locate and collect treasure.

Conception II: Children of the Seven Stars
US$ 24.99

If you are familiar with Disgaea 4: A Promise Revisited, why not let others know?

Didn't even interested when doing research about this game (the chars graphic are 'less' serious for me), but due to limited of turn-based RPGs on Vita, I decided to buy this game, and boy I don't know why I didn't get to play this game earlier.

A MUST have for a fan of RPGs especially a turn based one, you'll get tons of excitement within this game, classes, abilities, levelling not just for your chars but also your weaponries, and high replay value for grinding (that was the myth, and apparently it is true), so give it a try, doods.

As for Play-Asia, nice packaging, great and timely customer service, and more importantly, customer oriented, so cheers on getting another regular customer. *two thumbs up*
uredream (179) on 10, Sep. 2014 08:43 (HKT)
addictive SRPG
It has been a successful franchise ever since PS2 platform. Anytime, anywhere playing DISGAEA is my own dream come ture class! BGM, System and characters in one small package.
matt986 (132) on 08, Sep. 2014 20:15 (HKT)
Worth the money
You can easily spend hundreds of hours in these Disgaea games and still not be bored. They're fun, they make you laugh and they have a lot of personality.

The shipping speed was good too. Thanks!
1 »