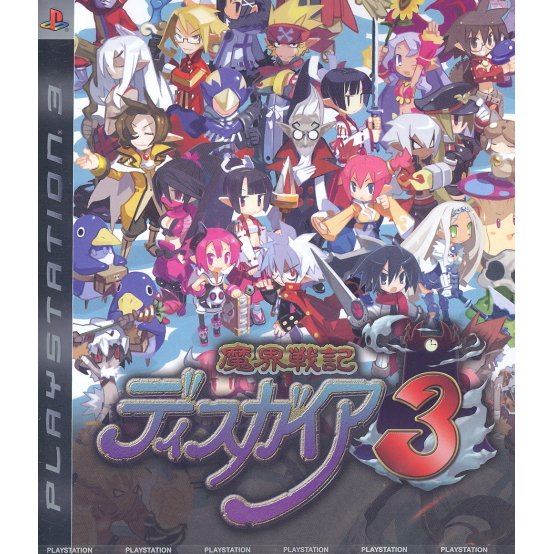 sold Out of print / Out of stock.
Manufacturer
Nippon Ichi Software
Rated By Our Customers
Compatible With PlayStation 3™ (PS3™)
Version


Click on a thumbnail to see more pictures for Disgaea: Hour of Darkness 3

Disgaea: Hour of Darkness 3 (aka. Makai Senki Disgaea 3) takes place in a Netherworld School called the Maritsu Evil Academy. In this demon school, a good student is one who engages in delinquent activities such as ditching classes, or not doing homework. The student who participates the most in these kind of activities is known as the Honor Student, while demons who arrive to class early and do their homework are known as delinquents. Mao, son of the chairman, has not once attended class since the beginning of school and is known as the honor-student of Maritsu Evil Academy. His ambition for the future is to overthrow his father, who also happens to be an Overlord, and take his title for himself. After reading a few volumes in his manga, Mao comes to the conclusion that "heroes are the ones who defeat devils". From that point on, Mao resolved to become a hero himself, convinced it will help him achieve his goal.

Eventually, Raspberyl, the delinquent of the school, learns about Mao's goal and begins to worry. If Mao were to achieve the title of Hero, then it would endanger her position as the school's "Number One Delinquent". She makes up her mind to follow Mao, stop his plan, and once again secure her title. However since Raspberyl is a demon delinquent, she tries to solve the problem without violence and talk him out of it instead. Seeing this from a distance, Almaz, a hero himself, misunderstands the situation and tries to save the day. Mao accepts the challenge and defeats him, stealing Almaz's title in the process. With the title of Hero, Mao believes he is one step closer to defeating his father and achieving his goal of becoming an Overlord.

If you are familiar with Disgaea: Hour of Darkness 3, why not let others know?