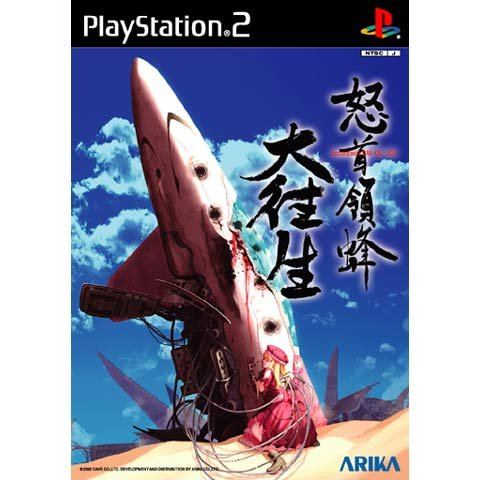 Arika
Rated
By Our Customers
Compatible with PlayStation 2™ (PS2™)
For JPN/Asian systems only.

NTSC
1w Expected stock arrival within 1 week
Price
US$144.99
Our previous price:
US$ 179.99
You save:
US$ 35.00( 19% )
Play-Asia.com Return & Refund Policy
Trustpilot
Trustpilot
Click on a thumbnail to see more pictures for Do Don Pachi Daioujou DV

Do Don Pachi Daioujou includes a complete translation of the arcade version on DVD, along with numerous other extra features. There will be something called "1/61 no Kiseki," which is either a special movie or an entirely different game. Also, an art work and movie gallery will be featured. Officially titled Do Don Pachi Daioujou DV, the game is an action-packed shooter where civilization has collapsed completely.

If you are familiar with Do Don Pachi Daioujou DV, why not let others know?

abbatemarco_5 (3) on 25, Nov. 2010 10:49 (HKT)
If you thought Touhou was hard...
Even Easy Mode on this game is incredibly difficult, yet the game itself remains very fun and addictive, even for a novice Manic Shooter player like myself.
While extremely hard, the game does offer a number of merciful gameplay modes for novices, such as 'No Bullets Mode' and 'Simulation Mode' where the player is invincible.
Very fun, but very hard. If you're looking for a game that's rare, good, AND challenging, look no further.
TAS (112) on 22, Aug. 2010 14:08 (HKT)
Cave owns your mortal soul...
It's a mark of how great a developer Cave is that a game as punishing as Dodonpachi Daioujou nevertheless remains both compulsive and horribly addictive, it's searing difficuly more a measure of your own incomptetence than unfair game design.
And the bonus DVD is a teriffic, er.. bonus. Rare as hen's teeth so if it's showing up as available on Play-Asia then buy it...dummy. :P
theburpman (4) on 03, Feb. 2010 11:22 (HKT)
One of the best Ports ever made for a game
DoDonPachi Dai Ou Jou is a genre-defining game by Cave, who already changed the way of playing Shooting titles by insert tons of bullets on screen with Batsugun and DoDonPachi. In this time, Cave was decided to "put the double amount of bullets" than DoDonPachi and they make it, in result, Dai Ou Jou is one of the most beautiful and hardest danmaku (bullet hell) games of the decade.

But, the most incredible thing about the PS2 Port is... the Port itself: Arika has made the most professional Port of an arcade game ever, with exact low-res TATE modes with the same resolution of the original arcade board and make test before the release of the game with the most awesome Shooting players of Japan, trying to delete all the Bugs that they can found.

The game comes with a Superplay DVD, something very unsual for the year of release and is simply awesome, with full-chain/1CC play who i enjoyed a lot. Also the exclusive Death Label mode (a boss-rush mode that maybe you know thanks to the Nintendo DS version of Ketsui) of the game is pretty fun and extremely challenging.

DDP Dai Ou Jou is simply one of the best, if not THE best, danmaku Shooting experience on Playstation 2 and this Port is even better than the Xbox 360 version (read on Google about the problem with 5pb, you will understand), so is a must have.
mkb (7) on 27, Jul. 2008 22:09 (HKT)
A Shooter You Cannot Miss!!
An absolutely amazing Arcade port!
I'd have to say that this is quite possibly the hardest shooter I have played, but it is very well among the best. The extreme difficulty only pushes you to get better and play stages over and over while still proving to be a BLAST.
The game comes with a Bonus DVD of a pro Japanese player that will blow your mind. "How does he do that!?"
I don't see this title being discounted or a "Best" version in the works, SO GRAB YOUR COPY TODAY BEFORE IT'S TOO LATE! You will not be disappointed.
bloody7thirty (2) on 14, Jul. 2008 00:11 (HKT)
VERY Nice!
I don't really know why I haven't heard of this great game ever since its release but I have been craving for this game for almost a year now. And thanks to play-asia for availing this. I've tried finding this game but I just found it here.

This game is absolutely hard. MUCH harder than the previous Dodonpachis, if you ask me. When I tried the simulation mode and tried the second loop, I got completely bludgeoned! Finishing the whole game on one credit will definitely be a great achievement.
Apart from that, the no-bullet mode is great for those who try to learn where the attacks come from. Frankly, with all the bullets in the later stages, it's quite hard to tell where the enemies are. You can still die from getting hit by the enemies (which happens quite a lot if you don't fire shots.)

Not to mention, the graphics are really beautiful. The music here is also good, but that's quite subjective.

The game CD also has some replays. And of course, we must not forget the other DVD in this set. It's a superplay DVD to help you know the game more and how to deal with stages.