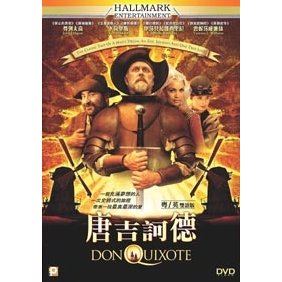 1-5d Expected stock arrival within 1-5 days.
US$16.90
Please take note that, once purchased, this item must be paid immediately and cannot be cancelled or returned.

John Lithgow stars as Don Quixote in the timeless story of an idealistic man who, along with an acquisitive squire, embarks on an adventurous journey in pursuit of his dreams. Alonso Quixana (Lithgow) has spent his life reading chivalric tales of knights capturing giants and rescuing damsels in distress. Captivated by the hero's noble quest for adventure, Alonso renounces his estate and declares himself Don Quixote de La Mancha. He dons a rusty suit of armor and sets out on a noble quest with his loyal squire, Sancho Panza (Bob Hoskins), to save Dulcinea (Vanessa Williams), a lovely young lady from an evil black wizard. Ironically, there are no real adventures to be had - Don Quixote lives within the mind of Alonso's imagination in this spellbinding tribute to the power of the mind. Magical special effects convey Alonso's brilliant fantasy world, where run-down inns become grand castles and windmills become giants. John Lithgow delivers a deft and spirited performance as a man captivated by his own imagination in this classic fable. Isabella Rossellini stars as the Duchess.

No reviews for Don Quixote yet.