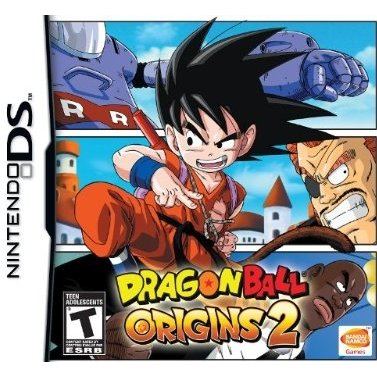 Jump into the world of Dragon Ball and play as Goku and his friends in search of the seven mystical Dragon Balls! Dragon Ball: Origins 2 is an all-new action-adventure game encompassing Goku’s battle against the Red Ribbon Army featuring a humorous and memorable story taken from the original anime series. Battle alone or with a friend on Goku’s continuing quest with engaging controls and a fun mix of fierce fighting, dynamic action, exploration and puzzles!

If you are familiar with Dragon Ball: Origins 2, why not let others know?

Gameplay & Controls: 7/10
The game's controls are familiar if you have played Origins 1. Again, like before, you can move your character with your Stylus which is sometimes very bothering. Makes me want to wish that the 3DS would come out sooner so we can play with the Analog Stick! The cutscenes could have been improved. I was sort of disappointed by the gameplay, they haven't changed much from the first game. The story gets boring if you have read the manga. Like I said before, controls could have been improved. Using the Kame-Hame-Ha was a drag & really hard, you're fighting a boss, the HP is down, both players. Suddenly, you get an idea to use KameHameHa, but the buttons made it so hard that I played a lot with Goku's fists.
Graphics: 6/10
No improvement at all from the first game. Although for a DS game, they look very good.
Other Features: 9/10
I like how they have introduced new ways to get to another place or side. Like you have to swing from a tree branch, e.t.c. Other than that, I also like how they gave us an option for playing with other characters like Eighter, Bulma, Arale & others.
Story: 5/10
It's pretty short for a DS game, since most of the DS games I play are huge in story. And once you finish it, you have no reason to play it again.
Overall Rating: 6.75 out of 10.