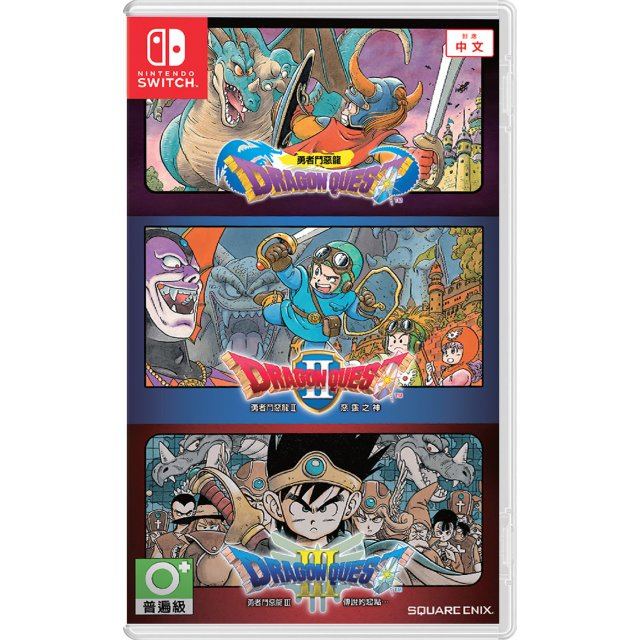 The peace of fair Alefgard has been shattered by the appearance of the nefarious master of the night known as the Dragonlord, and the Sphere of Light, which for so long kept the forces of darkness in check, has been stolen! It is time for you, a young warrior through whose veins flows the blood of the legendary hero Erdrick, to set out on a quest to vanquish the Dragonlord, and save the land from darkness!
Experience the first episode of the DRAGON QUEST series loved by millions in Japan and worldwide! Created by a legendary trio with the master creator Yuji Horii, the revolutionary synthesizer score and orchestration by Koichi Sugiyama, and art by master manga artist Akira Toriyama.

A century has passed since the events of the first DRAGON QUEST, during which time the descendants of the hero of Alefgard have forged three new nations. But the peace they have known is no more. Demon hosts summoned forth from the darkness by High Priest Hargon have brought the land to the brink of ruin once again. Now, the young prince of Midenhall must set out to find the other two descendants of Erdrick so that together they might defeat the nefarious Hargon and restore peace to their world.

On the morning of your sixteenth birthday, you are charged with a seemingly impossible task by the King himself: to assume the mantle of your father Ortega, the hero of the land of Aliahan, and slay the Archfiend Baramos, master of darkness! What trials await you, intrepid hero, as you set out on a quest not even your legendary father was strong enough to complete?

If you are familiar with Dragon Quest 1+2+3 Collection (Multi-Language), why not let others know?

atombomb66 (1) on 14, Jan. 2020 21:37 (HKT)
Dragon Quest I-III
These classics DQ games are some of the great early classics JRPG'S. The games themselves play just like the did in original format, but I wish they would not have put the mobile graphics in. That is just my personal preference. If you are a fan of DQ, I highly recommend getting the physical version.
Shiinu (1) on 14, Jan. 2020 18:15 (HKT)
Dragon quest Nostalgic!
If you are a fan of DQ series, this is for you! Nice price and good revision of the original games with new sprites and animations.
vandil (3) on 11, Jan. 2020 12:42 (HKT)
A Great Way To Own Physical Copies
If you played DQXI, there’s clearly a connection to DQ1-2-3. This collection is a solid way to own these classics as Physical copies and continue the Erdrick legacy.
DarthYoshiBoy (1) on 27, Dec. 2019 04:35 (HKT)
Great games marred by terrible presentation
These games are the grandparents of nearly every JRPG that you may know and love today. They are fantastic at their core and these modern remakes being based on the GBC/SNES remakes brings a series of quality of life upgrades that makes it possible to enjoy them with minimal archaic frustrations.

The only issue that takes this down to 4 out of 5 stars is the lack of a consistent artistic presentation. The games each have several different artistic visions competing with each other within the individual games and it makes the presentation look like something someone muddled their way into after years of reiteration in RPGMaker, rather than being a first class homage to the classic foundation games of an entire genre.

These are still great games and if you can get past the glaring issues in the presentation this is likely the best way to play them to date.
leo.j.picon (2) on 25, Dec. 2019 11:06 (HKT)
Dragon Quest I-III
Not being a mobile gamer, I was pleasantly surprised with the graphics.
Which in my experience seem to get better with each game, III looking and running the smoothest.

However, I & II seem to stutter a bit when traversing maps. It's a bit jarring at first, but by the end of the first, it's something you become used to.

They seem to have streamlined much of the Gold and Experience to make a smoother playthrough, which isn't a complaint. You can still be defeated, but it won't take 25+ hours to beat the first game.

The sound is a pleasant update to their NES and GBC counterparts.

I would like to mention that DQ III is lacking a bit of additions from the GBC version, but it's minor, just a few spells to aid with memory of quests and such.

However there is a post game, and it is best version of all three I personally have ever played.

If you are a fan of old school RPGs, or Dragon Quest, I would highly recommend this, if for no other reason than to have a physical copy that you can see and touch, as well as display on the shelf.


My only concern is that it is English when inserted, but the box an most notably the spine, is in fact Chinese.

However I believe there is a site you can get custom made Switch cases/cover art in English on ETSY. Something to be mindful of if that's an eyesore to your collection.

All in all, I highly recommend it on the basis of physical copies alone.
1 »