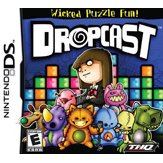 Spell casting meets block matching in this wicked fusion of magic battles and puzzle solving skills. Ingrid didn't play nice with the other boys and girls so she decided to make some new friends...from her stuffed animals. Once her toys came to life they needed life skills, and she was happy to teach them 24 devastating spells to use and abuse.

If you are familiar with Drop Cast, why not let others know?

PuNiao (365) on 03, Feb. 2009 21:25 (HKT)
Reign of the evil soft toys
Soft toys with twisted personalities, strange powers and a penchant for violence slug it out in a deadly match of spells and wit. The premise might sound strange for a puzzle game but oddly, it works for Dropcast, the first made-in-Singapore DS game. Dropcast is memorable because of its dark undertone and quirky writing (for examples, go to www.dropcastgame.com). First released in September by Singapore-based Mikoishi Studios, Dropcast has received little fanfare. This is a shame because it is worth a second look. For an indie effort, the production values are pretty high, with good art design and a suitably snazzy techno soundtrack. In gameplay, Dropcast is a variant of the classic puzzle gamer Super Collapse, in which you tap blocks of the same color to make them disappear.

Dropcast's innovation is its head-to-head competitions: You either play against the computer AI or against human opponents. Up to four players can have a go at the same time and each can collapse big blocks to power up special attacks to unleash on opponents. You play as one of eight diabolical toys, each of which has its own special attacks. For example, Tex (short for Tyrannosaurus Rex) has a lock-jaw skill that freezes opponents' columns. In the Battle Royale mode, you climb to the top of the heap by defeating all of the other toys. It sounds simple but the game is not for those with slow reflexes and wits. The computer AI was brutal: It unleashed attacks and counters with far greater precision than a human player is capable of. I also found combat a tad chaotic. Some of the spells are very powerful, which makes the game potentially unbalanced with big blowouts. This, combined with the tough AI, quick battle pacing and no option to tweak settings, creates a difficulty that takes some fun out of the game.

Besides Battle Royale, there is another mode called Ingrid's Curse, which is best described as a fusion of Super Collapse and Tetris. This timed puzzle game has loads of moving parts. Players have to worry about two screens at the same time, both of which have different gameplay rules. As a casual puzzle player, I found it too complicated. On the other hand, the Battle Royale mode is fun, especially when played with friends. The game is played in book mode (that is, the vertical side of the screens face you). This is an unusual stylus arrangement but it works quite well. I also like the download play option, which is a great addition to this budget title. Download play means friends who do not own the game can download a portion of the game - not just demos - for free via the Nintendo DS Wi-Fi. If you are a puzzle fan or just curious about what a Singapore studio can produce, Dropcast is a budget game well checking out.