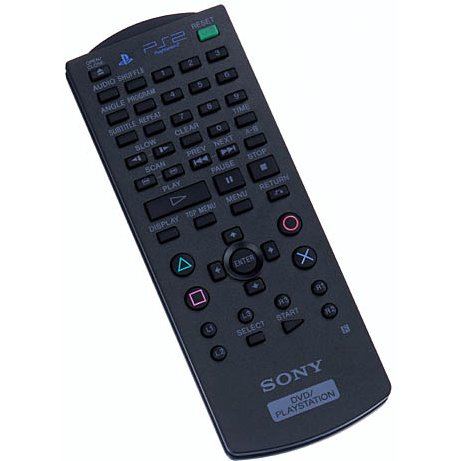 Admit it: all in all, the PS2 is a pretty good video game console, but it's a mediocre DVD player. Easily the most major sin Sony committed against DVDphiles was the initial unavailability of an official remote control. Because the PS2 gamepad is a stunningly poor substitute for a real remote, Sony's official remote control entry comes as a welcome, but not quite perfect, solution.Compared to most third-party PS2 remotes, Sony's design is much less childish. It's quite comfy, and, aside FROM a few extra buttons modeled after the PS2 controller (X, O, R1, R2, etc.), it features the same style as most of Sony's slick AV remotes. Tragically, Sony omitted both eject and power buttons. What were they thinking?

The supplied new software drivers add quite a bit of functionality to the PS2, making it almost as feature-packed as a regular low-end DVD player. Three-speed scan, slow motion, A-B play, shuffle, chapter program, and other enhancements have now been added to the PS2's playback capabilities. Most of these features require the remote to access. Also, to use the drivers, you'll need to keep a PS2 memory card (where the new software is stored) and the IR receiver constantly plugged INTO a gamepad port--a minor headache. Also, while most of the problems with untimely frame skipping are solved, I still found the chapter rewind to be somewhat slow and unresponsive.

DVD fiends who can bear Sony's tiny control buttons will find this model easily the most functional of the PS2 remotes. While the PS2 will never REPLACE a full-fledged DVD box, at least it now has a decent remote control that's on par with the big boys.

No reviews for DVD Remote Controller Kit [for SCPH-50000 or higher] yet.