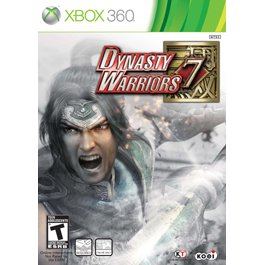 In the new Story Mode, follow the ascent and fall of heroes. In Dynasty 7, experience a new Story Mode and follow the captivating story of four Kingdoms battling for rule of China. Experience the individual tales of the Shu, Wu,Wei and the new Jin kingdoms as they shape China from the warring chaos at the end of the Later Han period to the division of the Land into Three Kingdoms, Take your faction through this key point in history and tell the story of the Dynasty that rose to seize power and unify the country once again.Immerse yourself in the epic scale of each Kingdom's story, viewing events from the eyes of a different character in each new stage.Now is your chance to live through an intense historical drama of greetings and goodbyes, friendships, feuds and rivalries.

If you are familiar with Dynasty Warriors 7, why not let others know?

sonicmeerkat (38) on 15, Dec. 2018 14:02 (HKT)
No campaign coop? Why even bother existing
I buy these games for couch coop, discovering it is restricted to conquest mode just makes me wonder why they even bothered making this.
The graphics are okay for this type of game.
The story is bland but the three kingdoms plotline can only be retold so many times.
The soundtrack is basic but acceptable.
Controls are fine.
No crashes encountered.

Enjoyable enough if you just want to kill smucks alone but that's not how I work.
side.aura (156) on 01, May. 2014 16:26 (HKT)
Amazing!
1 of the best hack n slash/beat them up game ever made. should have it now b4 its to late bcuz;
- best price to buy
- fast n safe delivery
- nice storyline
- easy to get achievement for full gamescore