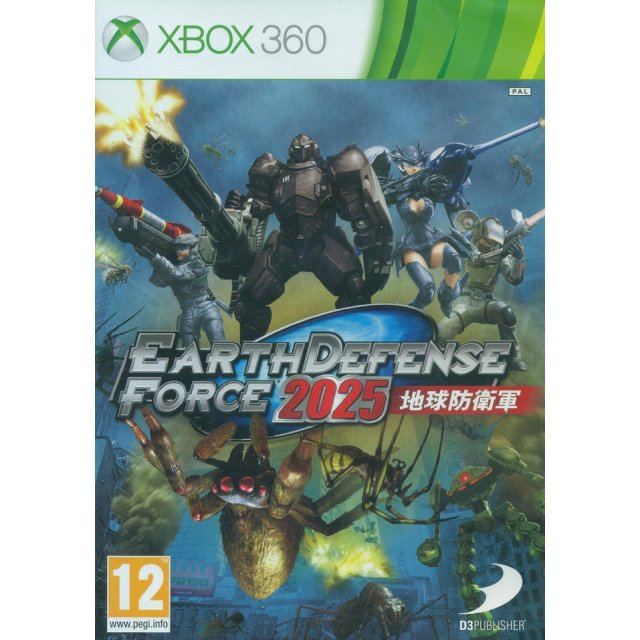 sold Out of print / Out of stock.
Manufacturer
D3 Publisher
Rated By Our Customers
Compatible With Xbox360™ (X360)
Version

Defending the Earth continues in the long awaited return of Earth Defense Force series. EDF soldiers returns in Earth Defense 2025, as the alien insect invaders come back from dormancy to disturb the peace once again. A new epic battle against Ravagers that will surely hold courage and pride in mankind.Earth Defense Force 2025 is an over-the-top action shooting game that arms players as an EDF soldier heavily equipped with hundreds of powerful weapons including assault rifles, sniper rifles, rocket launchers, energy weapons and grenade launchers to drive away insect infestation from all enemy fronts. Earth Defense 2025 introduces four new soldier classes such as Rangers, Fencers, Air Raiders and Wing Divers who are ready to battle out with Ravagers in order to save humanity.With tons of missions in EDF, Earth Defense 2025 is filled with incredible action in five different difficulty modes. There is also online multiplayer supporting up to four players, allowing players to team up with friends to create an unimaginable EDF squad and fight side by side against Ravagers. The Earth Defense Force is mankind's last line of defense. Gear up, attack the Ravagers and save the people!

If you are familiar with Earth Defense Force 2025, why not let others know?

[This review is based on another version of this product]
manjiuay (36) on 06, Sep. 2013 14:27 (HKT)
good game
pretty good for EDF fans to continue the collection. easy control, shoot them up style. nice addition to have online play
[This review is based on another version of this product]
GG (1) on 07, Aug. 2013 22:37 (HKT)
Best EDF game yet!
This is the prettiest, most detailed version of the game yet.
It helps to at least be able to read katakana, but with a bit of trial and error and knowing how things worked in EDF 2017 or GDF, you should feel right at home.
The basic atmopshere shouldn't lock you out even if you just catch up on the occasional english word and that's all that's matters.
[This review is based on another version of this product]
mushaconvoy (1) on 27, Jul. 2013 19:23 (HKT)
Sandlot have done it again.
If you're a fan of EDF3/2017, this is a must for you. Perfect example of a game where graphics and hollywood voice actors count for nothing next to brilliant gameplay. Easy to pick up and play with its vast number of short missions, but tough to master. Over 500 weapon across 4 different characters.

Couch-coop with a buddy or take the fight online with 3 others. For those that can't read Japanese, there is no English language option. There is a lot of text, but nothing that'll stop you from enjoying the game still.

This game would get 5 stars, but as of this review the game has problems. Split-screen has some really bad slow-downs and the loading times seem to take forever. Neither of these issues are present on the Xbox 360. Hopefully they will be patched soon.
[This review is based on another version of this product]
Takku (6) on 25, Jul. 2013 17:52 (HKT)
EDF4 is the real deal
Forget Insect Armageddon, EDF4 is really good.
[This review is based on another version of this product]
nitramr1 (30) on 11, Jul. 2013 13:36 (HKT)
Best game in the EDF franchise
Earth Defense Force 4 returns to the roots of EDF2017 with a massive load of content this time for the pleasure of the fans. The game brings the old-school gameplay of the franchise in 85 missions with 4 diffrents classes (Ranger, Air Ranger, Wing Diver and Fencer) and hundred of weapons playable offline or online with full coop support. For those who aiming to complete everything in the game, the expression "Worth every penny" is the perfect example here where the player will need to complete over 1700 missions! Without a shadow of doubt, this game is a must-buy not only for the fans but also for those who seek a no-brainer game, old-school gameplay.