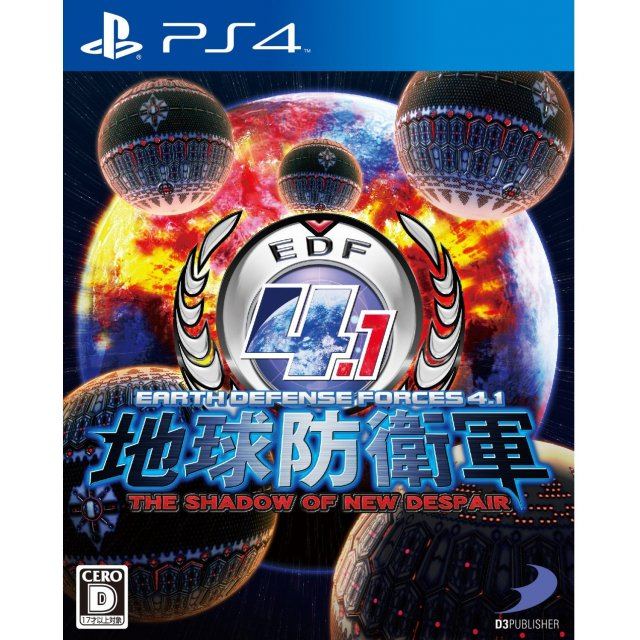 Works on all systems sold worldwide, a correct regional account may be required for online features.
1w Expected stock arrival within 1 week.
US$33.99
Our previous price:US$ 74.99
You save: US$ 41.00( 55% )
Manufacturer
D3 Publisher
Rated By Our Customers
1w Expected stock arrival within 1 week
Price
US$33.99
Our previous price:
US$ 74.99
You save:
US$ 41.00( 55% )
Play-Asia.com Return & Refund Policy
Click on a thumbnail to see more pictures for Earth Defense Forces 4.1: The Shadow of New Despair

Defending the Earth continues in Earth Defense Force 4.1 as it is a port of the Earth Defense Force 2025 title released for X360 and PS3. However, producer Nobuyuki Okajima has stated that the title will naturally feature improved visuals (thanks to the PS4 hardware) and additional story content not featured in the original edition of the game.

The game will retain the same four class system, meaning that players can chose to fight the alien and insect hordes as a Ranger, Wing Diver, Fencer, or Air Raider.

That won't be all you're fighting as EDF 4.1 will feature awesome Kaiju vs Robot battles! One of the monsters shown off is named Erginus, an unknown beast from the deep sea, however the popular theory is that he originated from outer space. The Earth Defense Force has deployed Baram in response, a massive 50 meter tall robot that players will use to fight!

D3 Publisher have also added a new spider-like vehicle to the game: the Depth Crawler. The Depth Crawler specializes in fighting in underground tunnels due to its ability to jump and scale walls, but is also effective at climbing through the city. The Depth Crawler also comes equipped with headlights which are incredibly useful in the dark enclosed spaces, even more so now that all static lights have been removed from the tunnels. The Depth Crawler will also be available in online cooperative play.

If you are familiar with Earth Defense Forces 4.1: The Shadow of New Despair, why not let others know?